NEW YORK (CNN) -- Misdemeanor assault charges have been dropped against "24" star Kiefer Sutherland in a head-butting incident at a New York City nightclub, according to Alicia Maxey Greene, spokeswoman for the Manhattan District Attorney's office. 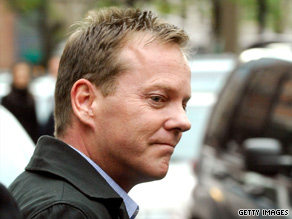 Kiefer Sutherland turns himself in to the NYPD on May 7. Charges against him have been dropped.

"We decided to drop the charge after a full investigation, including after speaking to a complaining witness, who was uncooperative," Greene told CNN Tuesday.

The charges stem from an incident in which Sutherland allegedly head-butted designer Jack McCollough at a New York City nightclub in May.

McCollough had claimed he was "the victim of a vicious, violent, unprovoked assault," according to a statement released after the incident from McCollough's publicist..

Several weeks after the incident, Sutherland and McCollough issued a joint statement, through Sutherland's attorney, in which Sutherland apologized.