U.S. offers up to $50 million for Mexican cartel members

WASHINGTON (CNN) -- U.S. authorities have ratcheted up pressure on one of Mexico's most notorious drug cartels, releasing new details about the so-called Gulf Cartel's operations and offering up to a $50 million reward for the arrest of its leaders. 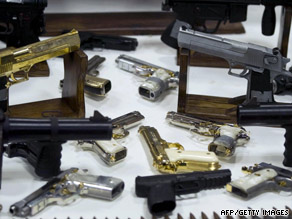 These are weapons that the Mexican army said it seized from the ruthless Gulf Cartel in 2008.

Concurrently, prosecutors updated a separate indictment against three other top leaders of the Gulf Cartel: Antonio Cardenas Guillen, Jorge Eduardo Costilla and Heriberto Lazcano, for drug trafficking related crimes, all believed to be at large in Mexico.

Fifteen other suspected cartel members are also named in that indictment.

"We have learned that the most effective way to disrupt and dismantle criminal organizations is to prosecute their leaders and seize their funding," Assistant Attorney General Lanny Breuer said in a statement.

To that end, the departments of justice, state and treasury are working together to place pressure on the Gulf Cartel and what authorities describe as its ruthless enforcement arm, known as Los Zetas.

The Department of the Treasury designated the four top bosses named in the indictments as Specially Designated Narcotics Traffickers, which authorizes the freezing of any assets they hold in the United States and other sanctions.

The Gulf Cartel and Zetas, nicknamed collectively as "The Company," are among the major drug cartels that are behind the drug-related violence that has swept Mexico in recent years, according to authorities. Since taking office in 2006, Mexican President Felipe Calderon has made fighting the cartels a major priority.

The group also operates in cities across the United States, authorities said.

The court documents detail telephone conversations between the four leaders and more than a dozen other cartel members allegedly discussing the transportation and smuggling of cocaine and marijuana into the United States.

"These indictments allege a stunning and sophisticated operation by 'The Company' to move illegal drugs into our communities and cash back to Mexico," Breuer said.

The State Department is offering a rewards totaling up to $50 million for information leading to the capture of four top leaders and six other cartel lieutenants.