(CNN) -- The wife of a man suspected of killing five people in Tennessee and one in Alabama was among the victims found in southern Tennessee, along with her son, father and brother, police said Sunday. 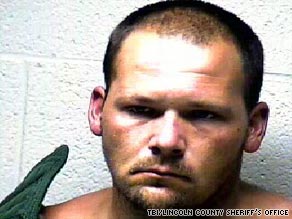 Jacob Shaffer was arrested in connection with the slayings of six people in Tennessee, police said.

The three found in one home were Shaffer's wife, Traci Shaffer, 38; her son Devin Brooks, 16; and the youth's friend and neighbor, 16-year-old Robert Berber, according to a statement Sunday from the Tennessee Bureau of Investigation.

The two people found at the other home were Traci Shaffer's father, Billy Hall, 57, and her brother Chris Hall, 34, authorities said.

Autopsies were being conducted Sunday on the five, and causes of death would be released by medical examiners, the bureau said.

A sixth person was found dead at a business about 30 miles away in Huntsville, Alabama, the Tennessee authorities said. The person's name was not released Sunday.

Jacob Shaffer was in one of the Fayetteville homes when Lincoln County sheriff's deputies arrived Saturday, authorities said. Police believe the deaths happened either Friday night or Saturday, according to Kristin Helm of the Tennessee Bureau of Investigation. Officials said they believe the deaths were related to a domestic dispute.

It was unclear when or how the Huntsville victim died. "We have no clue yet as to what unfolded there and how it relates to here," Huntsville Police Sgt. Mickey Allen said Saturday.

Without naming Shaffer, Allen said Tennessee authorities told him a man confessed to a slaying in Huntsville and to five other killings in Fayetteville.

Shaffer faces five counts of criminal homicide in the Tennessee deaths, the TBI statement said. He was in the Lincoln County Jail without bond Sunday.

All About Murder and Homicide • Tennessee