NEW YORK (CNN) -- In 2009, some units of the New York Police Department still function more like "Dragnet" than "CSI." They rely on typewriters. 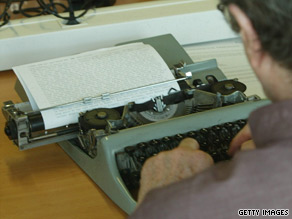 Records show New York City signed a $432,900 contract for typewriter maintenance with in 2008.

NYPD Deputy Commissioner Paul Browne confirmed the department's continued, if limited, use of the 20th-century writing devices, explaining that they're mainly used for filling out property vouchers -- forms that officers must file when they seize items during case investigations. The typewriters also are retained in case a technological meltdown disables the NYPD's computers, he said.

The vintage typing machines do not come cheap.

Eugene O'Donnell, a former New York police officer who now lectures at the John Jay College of Criminal Justice, said the typewriters are an anachronism -- and a waste.

Deputy Commissioner Browne emphasized that "we have a $4 billion budget" and the financial resources devoted to typewriters are relatively miniscule.

Officers interviewed by CNN on the street had no soft spots for the contraptions.

"It's so antiquated," said one officer who did not want to be identified.