ALSIP, Illinois (CNN) -- A Cook County cemetery where hundreds of graves were dug up and allegedly resold has been declared a crime scene, meaning that relatives of people believed buried there will not be allowed to visit for several days, an official said Friday. 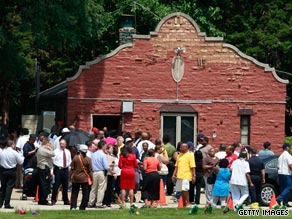 Family members and police gather outside the Burr Oak Cemetery office in Alsip, Illinois, on Wednesday.

"It would be the height of irresponsibility for me to invite people in, to raise expectations and then crash them," Cook County Sheriff Thomas J. Dart told reporters in a news conference held at Burr Oak Cemetery in Alsip, Illinois. He pleaded for patience, saying he hoped to reopen the 150-acre cemetery to the public in five to seven days.

Dart said the scope of the investigation has broadened to include "Babyland," a section of the cemetery intended for children.

"A lot of women came up to me and asked for help with Babyland," he said. "To a person, every one I talked to could not find any of their children in Babyland."

A large number of grave sites "are completely missing," he said, adding that he had received more than 5,000 telephone inquiries and 1,700 e-mails about the matter since the investigation began.

As many as half of the complaints were about missing headstones, 25 to 30 percent were about loved ones who had been relocated, he said.

He cited the experience of one family looking for 10 relatives buried there. "They couldn't find anybody," he said.

In addition, in some cases there are no records of burials having taken place, despite relatives' insistence that they did, he said. In other cases, records have been altered, destroyed or found in people's houses, he said.

"Our office has to investigate over 5,000 grave sites due to the vast amounts of inquiries from grieving family members," he said.

Dart said he himself walked through the cemetery on Friday and what he saw was disturbing. "I found bones out there," he said. "I found individuals wandering aimlessly looking for their loved ones who can't find them."

Some people told him that an entire area that used to have gravestones facing in one direction now has them facing in another direction, he said.

"This is getting bigger," he said. "We don't have an end in sight ... more people have not found relatives than have found them."

More than 2,000 families have descended on the cemetery since authorities uncovered what they say was a scheme to resell the plots, excavate the graves, dump the remains and pocket the cash.

He had said earlier this week that the number of disturbed graves was around 300, but said Friday that number was sure to rise.

One family arrived on Thursday to bury a woman in a plot they had purchased and found the plot was already occupied, he said.

Authorities also discovered Emmett Till's original casket in a dilapidated garage on the cemetery grounds. The casket had been replaced by a new one after Till's body was exhumed in 2005.

"There was wildlife living inside of it," Dart said of the old casket, found in the corner of a garage filled with lawn care equipment and other "piles of things."

Till was killed in August 1955 in Mississippi after the 14-year-old reportedly whistled at a white woman.

His body was exhumed 50 years later as part of a renewed investigation into his death. The Chicago Tribune reported that he was reburied in a different casket.

Thousands of people had viewed Till's body in the original casket in Chicago shortly after he was killed, the Rev. Jesse Jackson said at the news conference.

"His mother had the gut and grit to say that 'I want America to see what they did to my baby's body,'" Jackson said about Till, whose body was mutilated.

"More than 100,000 saw his body lying at the church. It is said that those who saw his body were never the same again," he said.

"Emmett Till's lynching redefined emotions in our culture in very fundamental ways. So to see his casket in this state of desecration and neglect is very painful."

Cemetery groundskeepers told investigators that Till's grave was not among those disturbed in the alleged resale scheme, Dart said earlier this week.

Carolyn Towns, an office manager for the cemetery; and Keith Nicks, Terrance Nicks and Maurice Daley, all gravediggers, have each been charged with dismembering a human body, a felony charge for which sentences range from six to 30 years, authorities said.

Steven Watkins, an attorney for Towns, said his client is innocent. The public defender's office in Cook County said it had represented the three others at the bond hearing but could not provide a statement for them.

Authorities began investigating the cemetery -- where, along with Till, blues legend Dinah Washington and some Negro League baseball players are buried -- about six weeks ago after receiving a call from its owners, who said they suspected "financial irregularities" regarding the business, Dart said earlier this week.

He said the owners are not believed to be involved in the alleged scam.