NASHVILLE, Tennessee (CNN) -- Former NFL quarterback Steve McNair may have been struggling to fill a void after retiring from football, something most star athletes go through when their careers come to an end, former teammate Eddie George told CNN. 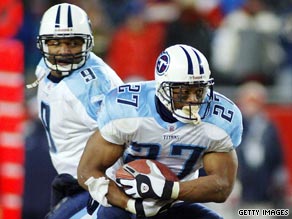 Eddie George runs after getting a handoff from Steve McNair in a 2004 game.

"I'm hoping that people can look beyond the circumstances surrounding his death. What people fail to realize is that when you make a transition away from the game -- emotionally, physically, mentally, spiritually -- you go through something. You change, and you're constantly searching for something," George said.

Police said McNair, a married father of four children, was killed by his mistress Saturday in what they have classified as a murder-suicide.

Police on Wednesday said Sahel Kazemi, 20, first shot McNair in his right temple, then fired three more shots at close range, most likely while he slept. She then sat on the couch next to his body and killed herself so that she would fall into his lap, police said.

George was the star running back for the Tennessee Titans and had combined with McNair to create a potent offense that took the team to the Super Bowl in 2000. It was McNair who led the Titans in a dramatic comeback that day, only to fall a yard short on the final play of the game.

George said that he last saw McNair this past football season when the Titans retired their jerseys and that they had a "chance to relive our moments." He said McNair, who retired from the NFL in April 2008, never indicated how bad he was struggling without football.

"Steve was a stoic, strong individual who never let on to anything wrong with his life," he said.

But George added almost every player struggles to cope in retirement and that "different people handle it different ways."

"I think underneath it all he was in search of filling a void -- and that stems from not playing the game. And that's what happens. Unfortunately," George said.

"I just know from experience that when you're used to doing something for so long that you love to do -- how do you fill that void?" George continued. "You're in search of something. Most players may go back to things they used to know. They may revert back to drugs, divorce rates go up, obesity. You're looking for something comforting.

"For Steve, it was uncharacteristic for him to be out there with this young lady like that. However, he was in search for something. So there's a much deeper issue here than just Steve and extramarital affairs. It was a person searching for something. So we need to have compassion for Steve and the young lady and his wife and family -- and really embrace that and celebrate his life and learn from anything else."

George added, "I'm pretty sure if he were here today he'd say, 'You know what I'm sorry. Things happen. I'm a man.' But he had a beautiful heart. He was a beautiful spirit."

Hundreds of Titans fans descended on LP Field in Nashville on Wednesday to sign a condolence book and to bid their local hero goodbye. A memorial service is planned Thursday night at Mount Zion Baptist Church.

Some Titans fans said they were unfazed by the tragic events that took McNair's life. They said they don't much care about the details of his personal life -- it's what he did for the team and the city during his amazing span as quarterback.

"His personal life, we don't even worry about that. What he did on the field was outstanding," Waverly Cameron said.

Nell Badacour smiled from her wheelchair. She said she came to pay her respects to the "real Steve McNair, the loving father and the loving husband and the great player and humanitarian he was."

"I wanted to be here to honor the memory of Steve McNair and what he was to all the children and to his family and to the nation," Badacour said.

Police on Wednesday officially classified the case as a murder-suicide that Kazemi carried out.

Nashville Police Chief Ronal Serpas told reporters that Kazemi's life was spiraling out of control in the final week, believing that McNair had another mistress and that she talked about killing herself. He also said she was concerned about mounting debts.

"She had become very distraught and on two occasions told friends and associates that her life was all messed up and that she was going to end it all," Serpas said.

He said Kazemi had seen another woman leave McNair's condo a few days before and was concerned "whether or not her relationship was unraveling with Mr. McNair." He said Kazemi followed the woman but never confronted her.

In the end, Serpas said Kazemi decided to kill McNair and herself. "McNair was seated on the sofa and likely was asleep, and we believe that Kazemi shot him in the right temple, then shot him twice in the chest and then shot him a final time in the left temple," Serpas said.

Her body eventually slid to the floor, at McNair's feet. Serpas said a trace amount of gun residue was found on her left hand. Coroner Feng Li said her right hand was covered in so much blood it was impossible to detect any gun residue on that hand.

George said he's still in shock over his friend's death.

"It's a sad ending to a great career, a great man, a pillar in the community. You just hate to see that."