(CNN) -- An Ohio firefighter faces jail time and may lose his job for shooting his two dogs to death rather than pay to board them while he went on a cruise. 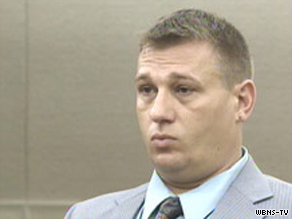 Columbus firefighter David P. Santuomo, 43, took Sloopy and Skeeter to his home's basement, suspended them from a pipe near the ceiling and fired at least 11 shots from a .22-caliber rifle fitted with a homemade silencer, Franklin County Prosecuting Attorney Ron J. O'Brien said.

Santuomo then wrapped the carcasses in plastic and dumped them in a trash bin behind Firehouse 27, where he worked, O'Brien said.

"This is pretty heinous," said Cheri Miller, spokeswoman for the Capital Area Humane Society, which carried out a search warrant in Santuomo's home. The humane society has limited law enforcement powers in Franklin County.

Santuomo pleaded guilty in June to two misdemeanor counts of improperly killing a companion animal and a felony count of possession of a criminal tool. Santuomo had fashioned a makeshift silencer by taping a 2-liter soda bottle to the end of the rifle. The incident happened in December.

"There were reports that he was bragging about this," she said.

Santuomo initially told investigators the dogs had ingested antifreeze and he killed them to put them out of their misery, Miller said. However, after necropsies showed the dogs were not poisoned, the firefighter admitted shooting them because he couldn't afford to board them, she said. Public records show Santuomo has twice filed for Chapter 7 bankruptcy protection and underwent a home foreclosure in 2003.

The Columbus Division of Fire has received more than 2,000 outraged e-mails and calls from the public, said Battalion Chief David Whiting, the department's spokesman.

The Division of Fire has concluded an internal investigation, including interviews with Santuomo, Whiting said. The report now goes to Fire Chief Ned Pettus Jr., who will schedule a disciplinary hearing. Punishment, if any, could range from a verbal reprimand to firing, Whiting said. With appeals and possible arbitration, the whole process could take a month or more, he said.

In the meantime, Santuomo is working in the division's fire alarm office, "where he is not dealing face to face with the public," Whiting said. If he remains employed with the fire division, he will return to his regular assignment, though that could bring a new set of challenges, Whiting added.

"If someone did this that worked next to you at work, how would you feel about working with him?" Whiting asked. "We'll cross that bridge when we come to it. ... There are a lot of options."

Santuomo has only minor disciplinary matters, such as tardiness, in his record, Whiting said.

Santuomo was sentenced to 90 days in jail, to be served in 10-day increments over the next two years. He also has to pay $4,500 in restitution, perform 200 hours of community service, stay away from companion animals for five years and write a letter of apology to be published in the local newspaper and the International Association of Firefighters magazine, the humane society's Miller said.

Santuomo's attorney said that his client is remorseful over his actions and that people need to temper their outrage. "It's the same old story. They couldn't care less about people and they love animals," lawyer Sam Shamansky said.

The firefighter, who could not be reached for comment, has no criminal history other than traffic violations, Shamansky said.

"It, of course, was a heinous act, and it's an act for which he's sorry and has accepted responsibility," Shamansky said of the dog killings. "He's been punished appropriately, and I think it's now time for the public to practice what they preach and show a little forgiveness and mercy. Maybe that might be a novel approach."

All About Columbus (Ohio) • Criminal Sentencing and Punishment