(CNN) -- Former figure skating champion and Olympian Nicole Bobek was free on bond Tuesday after New Jersey police accused her of being part of a drug ring. 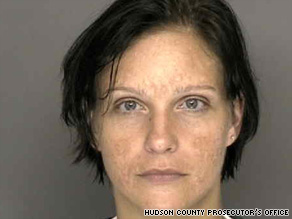 Bobek, 31, who won the U.S. figure skating title in 1995, was arrested at her home in Jupiter, Florida, last week on a charge of conspiracy to distribute methamphetamine in Hudson County, New Jersey, according to Guy Gregory of the Hudson County prosecutor's office.

She waived extradition rights to face the charges in New Jersey and made her first appearance in court on Monday via video, entering a plea of not guilty, Gregory said.

Bobek was released Monday night on bond, according to Sean Wilkes of the Hudson County Jail.

According to the prosecutor's office, 20 people have been arrested in connection with the alleged drug ring, which police have been investigating for nearly a year.

Bobek could face up to 10 years in prison if convicted.

Her attorney, Sam DeLuca, was not immediately available for comment.

All About Drug Trafficking • New Jersey