(CNN) -- The Cherokee County Sheriff's Office on Friday released a second sketch of a man believed to have fatally shot four people in less than a week near Gaffney, South Carolina. 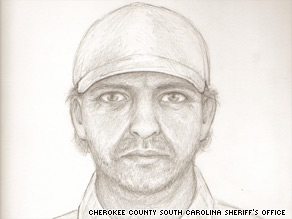 Police say the suspect may be driving a light-gray or champagne tan 1991-1994 two-door Ford Explorer.

"Let me say that, under the FBI's definition of a serial killer, yes, we have a serial killer," Sheriff Bill Blanton told reporters in Gaffney, a town in the county of about 54,000 residents some 50 miles southwest of Charlotte, North Carolina.

Police said he may be driving a light-gray or champagne tan 1991-1994 two-door Ford Explorer.

He would not say whether the Tylers were bound.

In a separate incident, police looking for the shooter tried to stop a dark SUV Chevrolet Blazer and wound up with yet another killing, this one apparently self-inflicted.

"The driver, who the officer didn't know at the time was a female, pulled over," Blanton said. "The passenger door opened; two children got out with their hands up."

The children were in their early teens, he said. "The mother takes off. The officer gives chase thinking maybe she's the suspect. Shots were fired during the chase."

As police cars converged on the SUV, "Somewhere in the middle she takes her own life," he said. "Right now, we're working it as a self-inflicted gunshot wound, suicide."

Blanton said narcotics were found in the car driven by the woman, whom he identified as a 35-year-old woman from nearby Blacksburg, South Carolina.