(CNN) -- Police wonder whether a photograph found in a prison cell a decade ago might lead to the bodies of two children who disappeared and are believed to have been murdered. 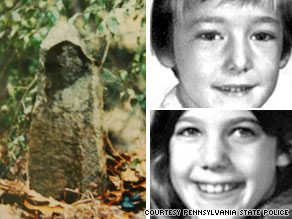 A stone marker in the woods may depict the final resting place of Michael and Karen Reinert.

Karen and Michael Reinert, who lived with their divorced mother in Ardmore, Pennsylvania, were 11 and 10 when their mother was murdered and they vanished in June 1979.

A former high school English teacher was convicted in the murders of Susan Reinert and her children. But the children have never been found.

The photo turned up in the prison cell of William S. Bradfield Jr., who died of heart failure in 1998 while serving three life sentences for the Reinert murders, according to investigators.

The photograph, which police say was developed in 1986, depicts a stone marker that resembles a hooded figure. The stone is surrounded by fallen leaves, with woods in the background.

Although dozens of tips came in when the photo was released a decade ago, investigators have been unable to locate the marker, said Trooper Brian Krause of the Pennsylvania State Police. He made the photo available again in response to media inquiries on the 30th anniversary of the Reinert murders.

Krause, who works out of the state police barracks in Harrisburg, is the lone investigator on a case that once occupied a task force of more than a dozen state police detectives and FBI agents. He described the investigation as open but "inactive."

Krause said he still receives occasional tips and follows up on them.

Susan Reinert's body was found early June 25, 1979, in the hatchback of her car. The vehicle was parked in the lot of a hotel in Harrisburg, miles from Reinert's home in Philadelphia's Main Line suburbs.

Reinert and Bradfield were English teachers at Upper Merion High School in King of Prussia, Pennsylvania.

The school's former principal, Jay C. Smith, also was convicted in the case in 1986, but the conviction was overturned on appeal in 1992. The appeals court cited improper hearsay testimony and said prosecutors withheld evidence from Smith's defense. Smith remained free until his death in May.

Prosecutors have long said that Bradfield and Smith plotted the murders together, with the motive of money. Reinert had named Bradfield as beneficiary of her estate and life insurance policies worth $730,000. She thought she was going to marry him.

At the time of the slaying, Smith was in trouble with the law. He was sentenced in Harrisburg on theft and weapons convictions on the same day Reinert's body was found there.

Until they died, Smith and Bradfield both denied that they had killed Susan Reinert and their children. At their trials, each man pointed the finger at the other.

The photograph was found among dozens of boxes of Bradfield's belongings. They also include some writings that appear to be in code.

Krause said that at least one person who was never charged in the case may have intimate knowledge of the Reinert slayings. That person may know what happened to the children, he said.

"I would certainly say that there is a possibility of a third person out there -- a probability," Krause said.

Krause asks anyone with information about what happened to Karen and Michael Reinert to call 717-671-7537.

All About Murder and Homicide • Pennsylvania State Police