(CNN) -- A 44-year-old Maryland woman faces charges of child abuse after police say she gave birth in a portable toilet and dropped the newborn into the waste tank. 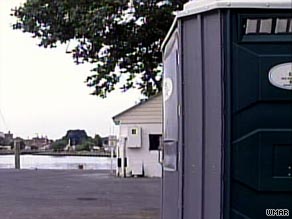 A Maryland woman is charged with child abuse after police say she dropped her newborn into a portable toilet.

After exiting the portable toilet in Long Wharf Park in Cambridge, Candy Vigneri got a cigarette from a construction worker and sat at a picnic table, police Lt. Wayne Bromwell said.

As she sat, a male passer-by approached the toilet but Vigneri warned him, "Don't go in there, I just had a baby there," police said.

The man immediately called 911. Vigneri returned to the toilet and retrieved the newborn from the foul liquid at the base of the tank.

The baby was unresponsive and covered with a blue antibacterial chemical agent when emergency responders reached the scene, police said.

Vigneri told officers that she didn't know she was pregnant.

She was arrested Wednesday on charges of child abuse and reckless endangerment and is being held on a $50,000 bond.

The baby is in stable condition at Easton Memorial Hospital. Dorchester County social services will take control of the newborn after she is released from the hospital.

All About Child Abuse