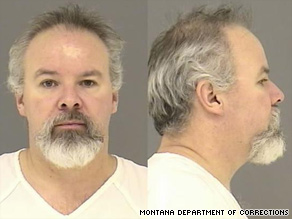 Partly mummified bones thought to be those of his uncle, Terry Kimball, were discovered Monday in a remote Rocky Mountain pass near Vail, Colorado. DNA tests are pending to confirm the victim's identity, and the cause of death is pending a forensic examination, authorities said.

Terry Kimball is one of several suspected homicide victims associated with Scott Kimball since his jailing in 2008. He is serving a 48-year sentence in state prison in Fairplay, Colorado, on theft and habitual criminal convictions.

However, Kimball probably will not be charged in any of the deaths.

Sources with knowledge of the cases said Kimball's December 2008 plea to theft and habitual criminal charges, and the 48-year sentence, was part of a deal that included revealing the locations of the bodies. Authorities wanted to give victims' families resolution. Without his cooperation, authorities doubt they have enough evidence to convict him.

Earlier this year, Kimball revealed where the remains thought to be his uncle's were, according to law enforcement sources close to the case. However, the search was delayed until snow had melted.

The FBI would not confirm that Kimball, 42, identified the site. However, FBI spokeswoman Kathleen Wright said, "we went to (a) specific location for a specific reason. It wasn't random."

Terry Kimball, 60 at the time, was last seen with Scott Kimball in September 2004, according to a 2007 federal search warrant affidavit.

Scott Kimball told his wife that his uncle had won the lottery and left for Mexico with a stripper, the affidavit said, but FBI investigators think Kimball killed his uncle and dumped his body in Vail Pass, more than 100 miles from the home they shared in a Denver suburb.

In March, Kimball accompanied FBI investigators to southeastern Utah to search for the body of Leann Emry, who was 24 when she vanished after departing on a camping trip in 2003. FBI agents found Emry's remains shortly after Kimball returned to jail.

Kaysi McLeod was 19 when she disappeared in 2003. McLeod, the daughter of Kimball's ex-wife, was last seen getting a ride to work from Kimball, according to the 2007 affidavit. In fall 2007, a hunter found her remains in northwest Colorado.

Kimball is also suspected in the disappearance of exotic dancer Jennifer Marcum, who disappeared in 2003, according to the affidavit.

Sources close to the investigation say they think Kimball killed Marcum and buried her body near Rifle, Colorado. Authorities have not found her remains.

"We are continuing to look for Jennifer, and we will leave no stone unturned," Wright said.

Kimball drew the FBI's attention in 2002 while jailed for writing bad checks. Kimball offered authorities information about his cellmate, Steven Ennis, who was suspected in a drug ring, according to the 2007 affidavit. After Kimball served his sentence, the FBI began paying him as an informant.

Kimball was supposed to report back to the FBI on Marcum, Ennis' former girlfriend, when she disappeared.

The FBI would not reveal how long or how much Kimball was paid. He was arrested again in March 2006 near Palm Springs, California, after a police chase and standoff.

All About Murder and Homicide • Colorado • Federal Bureau of Investigation