(CNN) -- Driving through Mississippi on his way from Texas to Georgia, Hiran Medina was pulled over, and he consented when a deputy asked to search his vehicle. 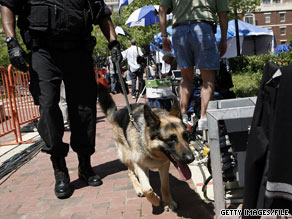 After the Hinds County deputy found $5,000, Medina said, he was handcuffed and told that the money was being seized, and that unless he took legal action against the county within 30 days, the money would be forfeited to the sheriff's department. Medina, a Latino man, was released, however.

While Medina's money was returned after he and the American Civil Liberties Union told the story to media outlets, the ACLU points to the incident in a report released Wednesday to demonstrate the kind of racial profiling by authorities that, it says, remains a problem nationwide.

The report, jointly released with the Rights Working Group, was submitted Wednesday to the United Nations Committee on the Elimination of Racial Discrimination. In it, the organizations blame government policies for contributing to the issue.

The Bush administration told the committee in January that the government was taking steps to eliminate profiling, relying on 2003 Justice Department guidance to federal law enforcement agents, the groups say.

"However, that document doesn't cover profiling based on religion or national origin, doesn't apply to state or local law enforcement agencies and doesn't include any mechanisms for enforcement or punishment for violating the recommendations," according to a statement accompanying the report. "It also contains a blanket exception to the recommendations in cases of 'national security' or 'border integrity.'

"As a result of the U.S. reliance on the vague Justice Department guidance and other Bush policies, people of color have been disproportionately victimized through various government initiatives, including FBI surveillance and questioning, special registration programs, border stops, immigration enforcement programs and the creation of 'no fly lists,' " the statement said.

"Instead of curbing racial profiling, the overbroad national security and border integrity exceptions in the Justice Department guidance have actually promoted profiling and created justification for state and local law enforcement agents to racially profile those who are or appear to be Arab, Muslim, South Asian or Latino," said Margaret Huang, executive director of the Rights Working Group, which aims to protect civil and human rights, according to its Web site. "We hope the Obama administration will fix the failed policies of the Bush administration and live up to its commitment to end racial profiling in the United States."

The organizations submitted the report to the committee in response to the Bush administration's claims, made before President Obama took office. The groups note Obama's appointment of Attorney General Eric Holder, "who has stated that racial profiling is not good law enforcement and is committed to combating this practice." In the report, they urge the Obama administration, Congress and state and local governments to consider its findings.

Fewer forms of overt discrimination remain in existence, according to the report, but "de facto racial disparities" continue to perpetuate discrimination. Among them, according to the report, are the National Security Entry-Exit Registration System, which requires certain non-immigrants to register at ports of entry; guidelines for domestic FBI operations, which the groups say open the door to abuse of power and racial profiling; Customs and Border Protection guidelines that the groups say are "problematic" and cause unjust treatment of people at airports and border crossings; and the 287(g) program, which permits local police to enforce immigration laws.

The report also accuses the federal government of encouraging raids of immigrant communities, particularly Latino ones. "These policies have unjustly expanded the purview of and undermine basic trust in local law enforcement, alienated immigrant communities and created an atmosphere of fear."

Asked to respond to the report, Justice Department spokesman Alejandro Miyar told CNN, "The fair, equal and vigorous enforcement of our nation's civil rights and anti-discrimination laws is a clear priority of this administration's Justice Department."

The FBI and Department of Homeland Security did not immediately respond to CNN requests for comment.

The report offers details of racial profiling in each state, using either data such as lawsuits, other studies or anecdotal evidence gleaned from human and civil rights groups or media reports.

The U.N. committee is expected to consider the report, along with the U.S. government's January submission and the submissions of other organizations, in its August session, according to the statement. The committee will then issue recommendations to the federal government regarding its human rights obligations under the International Convention on the Elimination of All Forms of Racial Discrimination, a treaty signed and ratified by the United States in 1994.

Under that treaty, according to the human rights organizations, countries are required to review national, state and local policies and amend or repeal laws deemed to be creating or perpetuating discrimination.