(CNN) -- Campers Steven Haugen and Jeanette Bauman headed out with their Labrador retriever, Caesar, for an overnight camping trip in the Willamette National Forest on June 30, 2005. 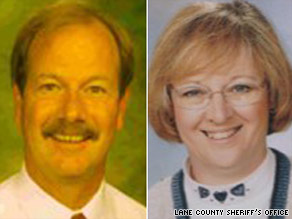 Steven Haugen, 54, and Jeanette Bauman, 56, were shot to death on a camping trip, along with their Lab, Caesar.

The Oregon day was bright and sunny, perfect for hiking and camping.

Haugen, 54, Bauman, 56, and Caesar were found shot to death at the couple's campsite the following day. Four years later, the killer continues to elude sheriff's detectives.

The case is similar to the double slaying of a mother and daughter a year later in neighboring Washington state. Both sets of victims were slain in rural settings on public lands, and in both cases the victims' vehicles were left at the scene, the Lane County Sheriff's Office said.

There is no apparent motive in either case. Haugen was a school counselor and track coach, and Bauman taught business. Neither had any known enemies.

According to police, the killer took some camping items and the license plate from their 1997 GMC Jimmy SUV.

"It's not clear what the reasoning is. Is it a robbery? We have a profile of the killer or killers with the help of FBI resources. One theory is that it could be a crime of territory," said Lt. Randy Smith of the Lane County Sheriff's Office.

This week marks the fourth anniversary of the slayings, and police wonder whether the killer could strike again, particularly if the killings were territorial.

Police believe that Bauman and Haugen were randomly selected, possibly by someone angry the campers were in "his woods." It's also possible that someone spotted them and saw them as prey.

Smith said authorities are seeing more territorial disputes in the woods, although they are still rare.

He is not certain whether Bauman and Haugen were armed but said his mother does not own a gun.

"It's possible Steven may have a handgun, as often campers do for protection from bears," he noted.

Police say they are not naming any suspects at this time but are watching a group of individuals who fit the profile developed by investigators and who may have been in the area at the time of the slayings.

Police are asking for help from the public. Anyone with more information leading to the arrest or conviction of the person or persons responsible for the deaths of Jeanette Bauman and Steven Haugen is asked to call the Lane County Sheriff's Office tip line at 541-682-4167. A $5,000 reward is offered.