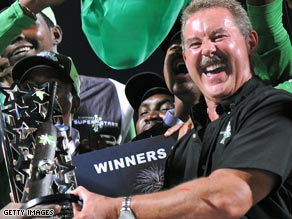 Stanford, accused of a $9.2 billion fraud by U.S. regulators, denied all wrongdoing in a tearful interview in April during which he threatened to punch his questioner in the mouth.

"I would die and go to hell if it's a Ponzi scheme," Stanford, who was ranked at No. 205 in Forbes magazine's list of 400 richest Americans with assets of more than $2 billion, told ABC News.

The assets of Stanford and his financial groups, based in Antigua and the Caribbean, are frozen while the U.S. Securities and Exchange Commission investigates allegations he ran "a massive Ponzi scheme," a pyramid scheme in which new investors' money is stolen to pay profits to existing clients.

During his ABC interview, Stanford complained that he had to fly commercial airlines after the federal government confiscated his six private jets.

"They make you take your shoes off and everything," he said. "It's terrible."

Stanford threatened to punch the interviewer when he was questioned about reported links to alleged money laundering for a Mexican drug cartel, charges he vehemently denied with the threat before backing down.

Before his arrest, Stanford faced an array of civil claims. He and his wife owe back taxes, penalties and interest of at least $226.5 million, the IRS said in court documents filed in Dallas, Texas, last March.

The final total could be even higher because the Stanfords have not filed their income tax return for 2007. The IRS says they owe $110 million in back taxes, $55.8 million in penalties and $60.7 million in interest for the 1999 through 2003 tax years.

The Securities and Exchange Commission has said that Stanford was behind "a fraud of shocking magnitude." FBI agents served Stanford with SEC papers accusing him and three of his companies of orchestrating a $9.2 billion investment fraud scheme.

With the filing, the IRS joins thousands of other creditors in the case who are seeking a crack at Stanford's remaining assets.

In February Antiguan and Barbudan regulators took control of Stanford's financial institutions on the twin-island nation, a day after federal agents served the Texas businessman with papers accusing him of running an investment fraud scheme.

In a complaint filed in February in federal court in Dallas, Texas, the Securities and Exchange Commission accused Stanford International Bank of using a network of financial advisers to sell about $8 billion of "certificates of deposit" to investors.

The bank boasted it had a unique investment strategy that had allowed it to reap double-digit returns on its investments for the previous 15 years, the SEC said.

The civil complaint alleged an additional scheme relating to $1.2 billion in sales.

Stanford's bank claimed its network had $51 billion in deposits and assets under management or advisement, with more than 70,000 clients in 140 countries.

The allegations against Stanford and his companies sparked runs on Stanford banks in Antigua and in Venezuela, where the government took over the local subsidiary in February after it recorded "extraordinary" withdrawals, according to Venezuela's superintendent of banks.

Stanford, who sponsored a cricket team and series of matches in Antigua, had his ties to the sport severed earlier this year when the England and Wales Cricket Board announced it would not play any further Stanford Twenty20 matches in Antigua as well as shelving plans for the Quadrangular Twenty20 events.

Under the deal struck between the ECB and financier Stanford last summer, England were due to play four further $20 million matches in the Caribbean, while the proposed Quadrangular events were scheduled to take place annually from 2009 to 2011, with each edition worth around $9 million.