(CNN) -- Two Pennsylvania teens will serve time in a county jail for participating in a brawl that left a Mexican immigrant dead last July. 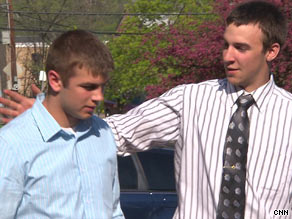 Brandon Piekarsky, 17, was sentenced to 6 to 23 months, and Derrick Donchak, 19, received 7 to 23 months for their roles in the beating death of 25-year-old Luis Ramirez.

Judge William Baldwin ordered the two to report to Schuylkill County jail on July 19 to begin serving their sentences.

In fashioning his sentence, Baldwin acknowledged the severity of the attack, which left Ramirez on life support for two days before he died, but said he could pass a sentence only in accordance with the jury's verdict.

"This wasn't any fight, this was a group of young athletes ganging up on one person. That's not a street fight," Baldwin said, referring to the defense team's characterization of the confrontation as a "street fight."

"You picked out a guy who wasn't one of you and beat the pulp out of him," Baldwin said.

The incident divided the small, rural mining town of Shenandoah into camps for and against the boys as it became a flashpoint for racial tensions across the country.

"The evidence suggests that Mr. Ramirez was targeted, beaten and killed because he was Mexican," Rendell said. "Such lawlessness and violence hurts not only the victim of the attack but also our towns and communities that are torn apart by such bigotry and intolerance."

During Wednesday's sentencing, Baldwin said he was surprised that Rendell had chosen to speak out on the case and told the court that his sentence was not affected by the governor's letter.

Fred Fanelli, Piekarsky's lawyer, said he felt the sentence was harsh, given the circumstances. The judge could have sentenced the teens to probation under Pennsylvania's sentencing guidelines.

"I'm disappointed that the court exceeded the aggravated range and sentenced him to six months. Having said that, I'm glad we finally have some finality with this case," Fanelli told CNN affiliate WBRE after the sentencing.

Baldwin heard from several teachers, coaches and family friends who testified that the teens were good kids who fell into a bad situation. They urged leniency so the teens could realize their potential as adults.

Ramirez's longtime girlfriend and mother of two of his children read a statement in open court before an audience consisting mostly of the defendants' supporters.

"He was my one and only love, and they took him away from me, and they took my children's father," Crystal Dillman said. "Now I have to live without my best friend and love of my life."

"I'm not the same person as before, now I feel a great emptiness within my heart," she wrote. "There are moments in which I'm alone and I ask myself: What do I do now that I don't have my son? I feel that without him, I am no one."

The judge also tacked on extra days to each boy's sentence for consuming alcohol earlier in the evening. For providing the alcohol to his friends before the fight, Donchak was also convicted of corrupting minors.

Jurors found Piekarsky not guilty of third-degree murder. Prosecutors had said he delivered a fatal kick to Ramirez's head after Ramirez was knocked to the ground in the alcohol-fueled brawl, which occurred on a residential street in Shenandoah the evening of July 12.

Prosecutors alleged that a group of teens, which included Piekarsky and Donchak, baited Ramirez into the initial confrontation after a night of drinking, hurling racial epithets at the undocumented Mexican immigrant.

After the fight broke up, witnesses said Ramirez came back at the teens, who beat him so severely that, according to a medical testimony, brain tissue oozed out of his skull during surgery at a hospital.

Jurors heard from several teens who witnessed the incident but did not participate, as well as one teen who pleaded guilty in juvenile court and another whose case is being handled in federal court. The testimony painted a picture of confusion, with several inconsistencies as to who did what.

Advocacy groups condemned the verdict and sentences, and called on the Department of Justice to bring federal hate crime charges against the defendants.

"The failure to hold these defendants responsible for their atrocious crimes denies justice not just to the Ramirez family, but also to the entire community by failing to deter similar crimes in the future," she said.

Richard Cohen, president and CEO of the Southern Poverty Law Center, said the case had troubling implications in the wider context of race relations nationwide.

"Since the year 2000, we've seen a 50 percent surge in the number of hate groups across the country, to a record 926 by our latest count," he said.

"The increase has been fueled by the same factor responsible for the rise in the anti-Latino hate crimes -- a backlash against the changing demographics of our country, a backlash fueled by politicians trolling for votes and pundits looking for ratings."

CNN's Brian Rokus and Rose Arce contributed to this report.

All About Murder and Homicide • Pennsylvania • Civil Rights