WASHINGTON (CNN) -- The man who tried to kill President Ronald Reagan is now allowed to visit his mother more, to get a driver's license and spend more time away from the mental hospital where he lives, a federal judge ruled. 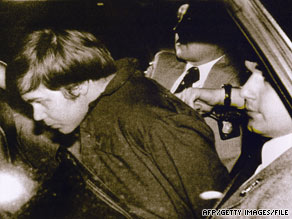 John Hinckley shot President Reagan and wounded three others because of an obsession with actress Jodie Foster.

The ruling, released Tuesday, expands the freedoms of John Hinckley Jr. over the objections of prosecutors. They argued that Hinckley is still mentally ill and harbors unhealthy feelings about women.

Hinckley, 54, has been confined to St. Elizabeth's Hospital in Washington since he was found not guilty by reason of insanity in the 1981 shooting of Reagan.

Hinckley shot Reagan and wounded three others reportedly because of an obsession with actress Jodie Foster.

Gradually, Hinckley has been allowed more freedom as he has progressed in therapy.

Recently, family members and hospital officials requested that he be allowed to visit his mother's home in Williamsburg, Virginia, for nine nights instead of the six he was allowed; to get a driver's license; and to do volunteer work, according to court documents. There also was a request for Hinckley to have more unsupervised time away from the hospital.

Prosecutors objected to many of the requests, saying that Hinckley "continues to maintain inappropriate thoughts of violence," court documents said.

Hospital officials asked him to keep a journal of his recent relationships with women, and some of those relationships alarmed prosecutors.

Prosecutors said Hinckley has been having sex with at least two women -- one who is bi-polar and the other who is in a long-term relationship with someone else. At the same time, Hinckley has been dating two other women.

His relationships could cause an "increased risk for violence due to depression or due to a request to act out to demonstrate his love for a woman," prosecutors argued.

Also troubling was a song that Hinckley recently recorded, called "Ballad of an Outlaw," prosecutors said. They described the song as "reflecting suicide and lawlessness."

Hinckley wrote it before his assassination attempt and recently re-recorded it. Hospital officials said he was trying to take responsibility for his past by recording the song again.

In the ruling, Judge Paul L. Friedman of the U.S. District Court in Washington sided with hospital officials and expanded many of Hinckley's freedoms, saying:

"Hinckley will not be a danger to himself or to others under the conditions proposed by the hospital."

All About John Hinckley • Williamsburg (Virginia)