ROME, Italy (CNN) -- American college student Amanda Knox told an Italian courtroom Friday that she was at the home of her boyfriend the night her roommate was killed two years ago, her attorney said. 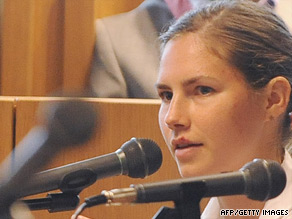 When she later was told that her roommate, British student Meredith Kercher, was found dead, Knox said in Italian, "I was like, 'No, no, how can this be?' "

Knox, a 21-year-old from Seattle, Washington, testified that she was at her boyfriend's apartment, smoking marijuana, on the night Kercher was killed. Both Knox and the boyfriend are charged with murder and sexual assault in the case.

She said she later gave a confused and conflicting deposition to police because she was confused by the questioning and felt pressure from the investigators.

She testified that on the night of November 1, 2007, when Kercher was killed, she was at her boyfriend's house all night and not at home, where Kercher's body was found the next day.

Knox is scheduled to resume testifying Saturday, when prosecutors plan to question her. The trial opened January 16.

After her testimony Friday, Knox's father, Kurt Knox, said he thought his daughter did well on the stand and predicted that her innocence would become more apparent as the trial continues.

Kercher family attorney Francesco Maresca, however, said the Knox on the stand Friday was a different person from the Amanda Knox seen at a preliminary hearing. She questioned who the real Amanda Knox is.

On the stand Friday, Knox said she was with her then-boyfriend, Raffaele Sollecito, on the night of November 1. She said she checked her e-mails at his place before the couple had dinner, watched a movie, smoked a marijuana joint, made love and fell asleep.

An earlier version of this story incorrectly characterized testimony that Amanda Knox gave on Friday. Knox's statement about using marijuana referred to the night of the murder rather than the day that she was questioned. Knox testified that the answers she gave to police questions were contradictory because she had not expected to be interrogated; she did not testify that she was unaware that the questioning was on the record. CNN regrets the error.

In the morning, Knox testified, she went home to the villa she shared with Kercher to take a shower. That's when she noticed a series of "strange things," including dried blood in the sink and on the bath mat, unflushed feces in the toilet and a locked door to Kercher's room.

The door to the villa had been left open, too, but Knox said she figured one of her housemates had simply stepped out quickly for an errand or to go for a run. She said she called out but nobody answered.

When Knox got back to Sollecito's house, she told him about the strange things, and he suggested they call the police, Knox testified. Sollecito called his sister, a member of the Carabinieri, the Italian military police, Knox said.

They returned to the girls' villa to check whether anything had been stolen, Knox said. Once there they met Knox's other roommate, Filomena Romanelli, and the Italian Postal Police.

As Knox stood outside, police went in and began shouting and banging down Kercher's door, Knox said. Between trying to understand what police were saying and having Sollecito translate for her, Knox testified that she got a confused picture of what was going on.

She sat in Romanelli's car to warm up, and that's when she heard Kercher was dead, Knox said.

"I closed in inside myself," Knox testified in Italian. Continuing in Italian, but using English phrasing, she said, "I was like, 'No, no, how can this be?' "

Kercher's body was found half-naked in her bed November 2, 2007. Prosecutors have said Kercher, 21, died in a "drug-fueled sex game" with Knox and Sollecito, now 25. An investigating judge found that Kercher died fighting off a sexual assault.

A third person, Ivory Coast native Rudy Hermann Guede, was convicted of murder in a fast-track trial in October and sentenced to 30 years in prison. He is appealing the verdict.

Kercher suffered a knife wound to the neck. In court papers, prosecutors alleged that Sollecito held Kercher by her wrists while Knox poked her with a knife and Guede sexually assaulted her.

Prosecutors have said that they have physical evidence placing the defendants at the scene and that the suspects gave investigators confusing and contradictory statements about their whereabouts the night Kercher died.

Knox first said she was at the house she shared with Kercher but then changed her story, according to court records. Sollecito said he was never at the house but was at his apartment, watching a movie on his computer with Knox. Later, he told investigators he did not remember whether Knox was with him the entire night.

Knox, wearing a short-sleeve white top, beige trousers and a ponytail, testified that she gave a November 6 deposition to police that was confusing because she felt pressured and intimidated by the way police were conducting the investigation.

Another reason that Knox cited for giving a confused and conflicting deposition is that she did not realize that police planned to interrogate her that day.

"The declarations were taken against my will, and they were taken in a state of confusion and pressure by the police," Knox testified before a packed courtroom, filled mostly with members of the media.

Knox testified that an interpreter was there and encouraged her to remember facts, which led her to say things that she later retracted.

She said police repeatedly called her a liar and mistreated her. When an attorney pointed out that police offered her tea at the end of questioning, he said it indicated that they treated her well.

It was that confusion that led Knox to hand-write a statement November 7 laying out all that she knew and didn't about the slaying.

"I know I didn't kill Meredith. That's all I know for sure," Knox wrote in the statement, widely reported in the news.

"That night, it seems to me I was in Raffaele's house," she wrote. "After dinner I noticed the blood on Raffaele's hands, but I was under the impression it was blood from the fish."

On the stand Friday, Knox said she wrote the statement of her own will.

Knox, who testified in both English and fluent Italian, is also being sued by local bar owner Patrick Lumumba for defamation of character. He was arrested early in the case but was released for lack of evidence.

Knox worked at his bar and initially told police that Lumumba was present when Kercher was killed.

On November 10, more than a week after the slaying, Knox told her mother from jail that she felt bad and felt responsible for Lumumba being behind bars. Asked by Lumumba's attorney Friday why she didn't share that information with police -- knowing it might cast doubt on his guilt -- Knox said it was because she didn't feel comfortable answering their questions.

"Quite frankly, I didn't have a good relationship with either the police or the public [prosecutor], because even he tried to suggest the answers I should give," Knox testified.

The trial is taking place in Perugia, a university town about 115 miles (185 kilometers) north of Rome.

A panel of eight judges is hearing the case. The trial has drawn more than 140 journalists from 86 news outlets to the courthouse in Perugia.

The presiding judge, Giancarlo Massei, has barred cameras from the courtroom and said he could completely close portions of the trial dealing with the most graphic sexual assault allegations.