(CNN) -- After stints as a guard in the jails of Washington, D.C., and on the streets of post-Katrina New Orleans, Stephen Tyrone Johns had settled in to a job he liked at the U.S. Holocaust Memorial Museum, family members said. 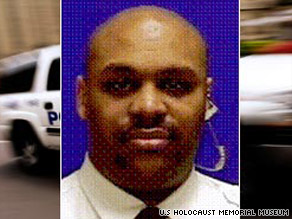 Security officer Stephen Johns reportedly opened the door for the man police say was his killer.

"It seemed to be kind of laid-back -- it didn't seem to be that dangerous," Leroy Carter, the stepfather who helped raise Johns since he was 3, told CNN affiliate WUSA-TV in Washington. "He had wanted to be on the Metro Police force or places like that, but I would have rather him been where he was.

"But it just backfired."

Johns, 39, was shot and killed while on duty Wednesday -- allegedly gunned down by an 88-year-old white supremacist who stepped into the museum with a rifle and began firing.

Johns is remembered by friends and family as a "gentle giant" -- he stood 6 feet 6 inches, according to Carter. And he lived up to the moniker to the very end.

One of his last acts was reaching out and opening the door for the man who shot him, police said.

James von Brunn, an outspoken Holocaust denier who had served six years in prison for a 1981 kidnapping attempt, was shot and wounded by Johns' fellow officers. He remained in critical condition Thursday at George Washington University Hospital.

Johns, a six-year veteran of the museum's security staff, was a resident and native of Temple Hills, Maryland.

In the hours following the shooting, friends and co-workers repeatedly remembered "Big John" for his quiet, friendly nature.

"To look at him initially he was very intimidating," said Alan Burkee, a friend and former co-worker at the museum. "But he was very shy. ... He had a great demeanor -- very pleasant, very courteous to all the visitors that came in and the staff that worked there."

Friends said Johns was an avid Washington Redskins fan and loved to travel, but lived just 10 minutes away from where his mother and stepfather raised him.

He had an 11-year-old son, Stephen Jr., and recently had remarried, according to friends.

"He was a pretty great guy," Stephen Johns Jr., known as "Little Stephen" to family, told WUSA. "He was always there for me when I was down or sad."

Carter had picked up Stephen after school to tell him the news of the shooting, and the two were on the way to the hospital when Johns died.

Steve Maritas is organizing director with the International Union of Security, Police and Fire Professionals of America -- of which Johns was a member.

He said the way Johns and his fellow officers responded Wednesday saved lives -- and it flies in the face of the stereotype of the run-of-the-mill security guard.

"If that was the case, there would have been 50 people shot yesterday," said Maritas, whose organization represents more than 30,000 officers nationally and about 5,000 in the Washington area.

"These guys are very highly trained, highly paid officers. It's not like they're just there wearing a uniform."

Johns had worked for Wackenhut Security Inc. since 2003.

Maritas said Johns and his colleagues trained for days like Wednesday -- when years of safety and quiet give way to a sudden burst of terror.

"Hopefully, you'll never have to use your gun," he said. "But you get a situation where you get a crazy guy like this -- it happens within two or three seconds."

For Carter, there will always a clear reminder of the stepson he raised as his own. Little Stephen, he said, looks and acts just like his father did at that age.

Carter said he takes comfort knowing that the roughly 2,000 people visiting the Holocaust museum at the time of the attack were able to walk away unharmed.

"That guy wouldn't have stopped until he was stopped," Carter said.