SAN FRANCISCO, California (CNN) -- Convicted "Unabomber" Ted Kaczynski, who terrorized the country with a series of mail bombs over nearly two decades, is fighting to stop a public auction of his diaries and other personal possessions. 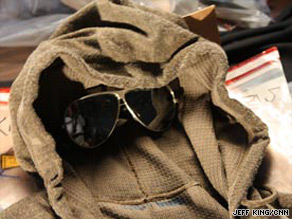 Ted Kaczynski is fighting auction of possessions like this jacket and sunglasses made famous by a police sketch.

But Kaczynski's five-year legal battle will come to an end soon unless he can convince the U.S. Supreme Court to review the case.

"I regard him as the essence of evil. He's evil and amoral. He has no compassion," said Dr. Charles Epstein, who was seriously injured in 1993 when a bomb went off in a piece of mail he opened at his home. The blast destroyed both of Epstein's eardrums, and he lost parts of three of his fingers.

Epstein, 75, is a world-renowned geneticist and retired professor at the University of California at San Francisco. He is one of four victims who are owed $15 million in court-ordered restitution from Kaczynski, and he told CNN the auction was important to victims.

Watch why the auction is causing controversy »

"Who would think that we would still be sitting, this many years later, still having dealings ... with the man who tried to kill us?" Epstein said.

Kaczynski was arrested in 1996, pleaded guilty in 1998 and is currently serving a life term in the federal "Supermax" prison in Florence, Colorado. CNN was given exclusive access to videotape the items that will be up for auction, which were seized from the Montana cabin in which Kaczynski lived for years and held in evidence by the FBI in San Francisco and Washington.

See who else calls "Supermax" home »

The property includes tools, typewriters, knives and a hatchet; Kaczynski's degrees from Harvard and the University of Michigan; and the glasses and hooded jacket made famous by an artist's rendering of the suspect. But experts say the most valuable items probably will be the 40,000 pages of Kaczynski's diaries and other writings.

"Personally, I don't think he has any rights to anything," Epstein said. "I think he abrogated all of his rights by his behavior."

The 9th U.S. Circuit Court of Appeals ruled in favor of the victims earlier this year, and now Kaczynski has until June 15 to file a notice of appeal with the U.S. Supreme Court. Steve Hirsch, a California attorney who represents the four victims, said he doubts the Supreme Court would consider an appeal, and thinks the auction could happen later this year. A private company will handle the auction, but no company has yet been selected.

"The victims were placed in this terrible position of either accepting this idea of an auction with all of its problems or letting Kaczynski have all of his things back, which would have been another wound for them," Hirsch told CNN.

In handwritten legal documents, in which Kaczynski refers to himself as "K," he claims, "The District Court's orders violate K's First Amendment rights."

"The case involves the question of whether the government, consistent with the First Amendment, can confiscate an individual's personal papers and sell them at public auction to enforce payment of a debt," Kaczynski wrote in one of his numerous legal arguments.

Lawrence Brown, acting U.S. attorney for the Eastern District of California, said his office has no choice but to support the auction.

"This is a directive from the 9th Circuit Court of Appeals," he said. "We were put in a situation where it was sort of an either-or. Either we returned all of the property back to Kaczynski, or we sought to maximize its value by holding an auction to put it back towards the $15 million that's owed in restitution."

Kaczynski, now 67, killed three people and wounded 23 others in a string of attacks from 1978 to 1995. The remainder of the victims have declined to seek restitution.

Federal agents gave the case the code name "Unabom" because universities and airlines were the early targets. Kaczynski quit a tenure-track position at the University of California-Berkeley in 1969 to build a 13-by-13 foot shack near Lincoln, Montana, where he lived without running water or electricity until his 1996 arrest.

Agents closed in after his brother noted similarities between his old letters and journals and the bomber's 35,000-word anti-technology manifesto. The New York Times and the Washington Post agreed to publish the document under a promise that the bombings would stop.

"If some funds are raised by this auction, to help out some of the victims, well, then that does help promote some level of justice," Brown said. "But you just cannot right the tremendous wrong that Kaczynski committed."