(CNN) -- William Whitaker is certain that somebody in the central Oklahoma community where he lives knows who killed his daughter. 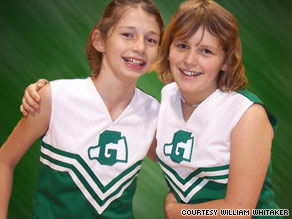 Taylor Paschal-Placker, left, and Skyla Jade Whitaker were found shot to death along a road a year ago.

The dirt road where the bodies of 11-year-old Skyla Jade Whitaker and Taylor Paschal-Placker, 13, were found is too remote for the killings to be the work of a stranger passing through, he says.

"There's absolutely no way that somebody from out of the area could've just stumbled upon the place," Whitaker said. "I know whoever did it told somebody, whether they were drinking or bragging or whatever, and whoever knows just needs to bring the information forward."

It has been a year since the two friends were shot multiple times in the stomach and chest less than a half a mile from Taylor's home in the rural community of Weleetka, with a population just over 1,000.

"Taylor was shot five times. My daughter was shot eight times. Thirteen shots between two little girls who never did anything to anyone," Whitaker said. "I don't know how a person can go to work, eat or sleep knowing what they did. I couldn't live with that on my conscience, but they've been doing it for a year now."

In the beginning, hundreds of tips poured in. Authorities pursued leads and analyzed evidence, but a year later, they have no suspects or witnesses leading them to any viable conclusions.

Oklahoma State Bureau of Investigation spokesperson Jessica Brown said during a press conference Monday that authorities have "good evidence" in the case but lack the final piece to make an arrest.

"If we could get this one piece of evidence that would help solve this case, that's what we need," Brown said Monday.

Investigators believe that the killer or killers could be from Okfuskee County, or that a member of the community knows something about what happened to the girls the afternoon of June 4, 2008.

"What we are frustrated about is the lack of cooperation we're getting from members of the public," Brown said. She stressed Monday that a $36,000 reward is being offered for information that leads to a conviction.

The girls were shot with two different guns, leading to the possibility that two people were involved, Brown said. The OSBI released a sketch of a person wanted for questioning last year, but they have not received information leading to him, she said.

But the killings remain fresh in the minds of Oklahomans. A billboard with the girls' faces and a tip hotline has loomed over Interstate 40 for several months.

A memorial service was planned for Monday in Weleetka to mark the anniversary.

"I can't go to the dry cleaners, the gym without people asking me, 'what's going on with those two girls?' Everyone in Oklahoma is emotionally involved in this case, and I think it's because it happened to two small children in an area you wouldn't think you'd ever have to worry about," Brown said.

Weleetka Police Officer Stacey Rice will never forget the image of the dead girls. He was the second officer on the scene after a relative called 911 around 5:30 p.m. that day.

"I really hope I never see anything like that again. It's just emotionally and visually traumatic. You see two small children lying on the ground like that and it's kind of hard to explain. Makes you want to go find your children," said Rice, a father of two teenage boys.

"It took me several minutes to realize what happened, but after a while, it kind of sank in, and that's when emotions started running ... anger, lots of anger, sadness, disbelief. Nobody wanted to believe what had happened."

The incident stripped the small, close-knit community of its innocence as people came to realize that they weren't safe, Rice said. Parents kept close tabs on their children and started locking their doors.

Since then, the guard has come down, Rice said.

"I don't think the fear level is as high as it was. People are kind of aware of it, that something like this can happen. They're still cautious, but I don't think as cautious," he said. "Just the monotony of everyday life, the basic routine, people get used to it and they forget about the dangers we face every day. We're not oblivious, but we put it in the back of our mind."

Skyla's father says he and his wife try to carry on for the sake of their youngest daughter, who asks about her older sister nearly every day. Skyla's room is the same as it was a year ago except for the boxes of cards from across the globe, as far as Japan, expressing sympathy and support.

Whitaker finds solace in visiting the memorial site set up at the crime scene, where people leave bouquets of flowers, stuffed animals, cards and other mementos. The most recent addition to the site is an 8-foot cross donated by members of the community.

All About Murder and Homicide • Oklahoma