(CNN) -- Federal authorities are searching for a man who has at least eight guns registered to him and has threatened to kill President Obama. 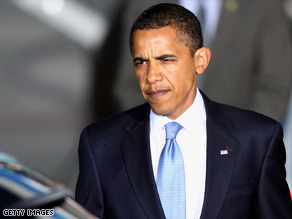 President Obama walks towards a car at the airport on Thursday in Dresden, Germany.

The man, identified as Daniel James Murray, is charged with making threats against the president of the United States.

He recently withdrew $85,000 from a Utah bank and told a teller: "We are on a mission to kill the president of the United States," according to court papers.

Murray is originally from New York, but was seen several times in late May in St. George, Utah, making bizarre statements at a bank.

According to a criminal complaint filed in federal court in Utah, Murray opened an account at Zions First National Bank on May 19 with a $85,000 check.

"With all this mess going on under President Obama with banks and the economy, I'm sure if citizens happen to lose their money, they will rise up and we could see killing and deaths," he said, according to the criminal complaint.

On May 27, he returned to the bank and tried to withdraw $12,000, but lacked proper identification.

"Not to be disrespectful, but if I don't get this money, someone is going to die," Murray said, according to the criminal complaint.

A bank manager was summoned and Murray was allowed to withdraw the money without proper identification.

Murray would not accept a check and demanded bills no larger than $50, the complaint says.

"We are 94 million miles from the sun, and are in between the sun and moon, and the eagle that flies between them and it's a giant step for mankind. ... I have traveled thousands of miles to be here and know things that are going to happen. ... the banking system will fail and people will die. ... there will be chaos in the world," Murray said.

He then made his threat against the president, the complaint says.

The next day, Murray returned to the bank, withdrew the rest of his money and closed the account.

Authorities do not know where Murray is and said he has been seen driving a blue 2001 Buick LeSabre with New York license plate number ERL 1445.

There are at least eight guns registered to Murray, including semi-automatic pistols and revolvers.

The president is on an overseas tour, having given a major foreign-policy speech in Egypt addressed to Muslims worldwide. He is now in Germany.

All About Barack Obama • Utah