Mom: 'I fear the worst, that my daughter is gone'

NEW YORK (CNN) -- After arguing with her husband, Liza Murphy walked out of their home in Emerson, New Jersey, leaving behind her purse, her cigarettes, her cell phone and her three children, her husband told police. There has been no sign of her since August 19, 2007. 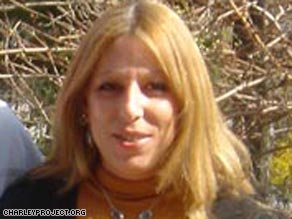 Liza Murphy has been missing from her home in Emerson, New Jersey, since August 19, 2007.

Murphy's friends and family reported her missing the next day.

"In my heart, I fear the worst, that my daughter is gone," said her mother, Sophia Stellatos.

Police searched extensively for Murphy, especially around a reservoir not far from her home, but they found nothing. Cadaver dogs caught her scent near the George Washington Bridge, but the trail went cold, police told the family.

Deepening the mystery, her husband, Joe Murphy, tried to take his own life a few days after his wife disappeared by walking into oncoming traffic and throwing himself in front of a fire truck, police say.

He was hospitalized and recovered from his injuries, but police say he hired a lawyer and is no longer cooperating with investigators.

His lawyer said Murphy, an Irish immigrant, has nothing to hide from the authorities. He said his client has no criminal record and no history of violence. Attorney Joseph Rem added that there was no physical violence in the marriage.

According to her family, Liza Murphy, 42, was not the type of person to take off on her own without letting her family know.

"She would never leave her three children behind voluntarily," her mother insisted.

"What doesn't make sense is Liza leaving her house without her purse, cell phone, wallet, keys or cigarettes," she added. "She was a heavy smoker, and if she took off after a fight for a walk to cool off, she definitely wouldn't leave without her cigarettes!"

Liza Murphy and her husband were having marital problems, her family said. Stellatos described Joe Murphy as possessive of his wife, never allowing her to go out with her friends. She said he was even jealous if she spent time with her parents.

Rem pointed out that his client has not been named as a suspect or a person of interest in the case. He said police have not asked to speak to his client recently.

Liza Murphy's children are 15, 13 and 10 years old now. Joe Murphy has full custody of them, and the Stellatoses have not seen their grandchildren since shortly before their daughter disappeared.

Murphy and her children had spent the week before her disappearance visiting with her parents, who live about 125 miles away. They returned the Friday before Murphy's disappearance.

Police say both the Murphy home and their vehicles have been processed for forensics, but they found no evidence of foul play or struggle.

Liza Murphy had been suffering from depression and was on medication for fibromyalgia, a painful condition that affects the muscles and soft tissues. Police say she may have been accosted after she left home, still stewing over the argument.

The police seek the public's help in this case. Anyone with information leading to the whereabouts of Liza Murphy or the arrest of the person responsible for her disappearance is asked to call the Emerson Police Department's tip line at 201-262-2800.