Ex 'Mrs. Rockefeller': 'I had a pretty big blind spot'

BOSTON, Massachusetts (CNN/In Session) -- She earned $1 million a year as a high-powered financial executive, yet she told a jury she woke up hungry in a cold house because her husband controlled everything. 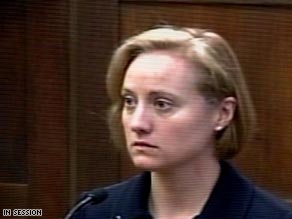 She said it took years to leave the man who told her he was a member of the moneyed Rockefeller clan because she didn't know the online passwords to their bank accounts.

Being the breadwinner offered her no status in her marriage, Sandra Lynn Boss, 42, testified Tuesday at her former husband's kidnapping trial.

"You mistakenly confuse money and power. Money and power are not the same thing in a relationship," she explained under cross-examination by her former husband's defense attorney, Jeffrey Denner, who at times seemed stunned by her answers.

The lawyer asked Boss why she didn't assert herself given that she was a "dynamic, intelligent woman" who financially supported the family. She responded, "I did assert myself but the abuse was pretty rough. There was a lot of anger and yelling."

Watch how she felt powerless to leave »

Denner asked how a successful businesswoman who was educated at Stanford and Harvard universities could fall for an impostor who called himself Clark Rockefeller.

Rockefeller, whose real name is Christian Karl Gerhartsreiter, is accused of kidnapping their daughter, Reigh, for six days in July and taking the child to Baltimore, Maryland, where he'd bought a townhouse near the harbor. His trial began last week in Boston, Massachusetts.

In her second day on the stand, Boss described the decline of a 12-year marriage that began with a whirlwind summer romance before her second year at Harvard business school. By the time her marriage ended, she said, "My personal life was scary."

She repeatedly referred to her 48-year-old ex-husband as "the defendant." Defense attorney Denner referred to his client as "Clark" during questioning.

Boss, who now lives in London, England, with Reigh, 8, publicly told her story for the first time on the witness stand. She has been excoriated in the media. One New York writer called her a "ding-bat doormat" who married a "Crockefeller."

It's more complicated than that, Boss explained under cross-examination. "He told compelling stories. It seems stupid in hindsight, and it really was, but that is how it was. ... I lived with a person who told me a set of internally consistent things."

And so, she never questioned why he never seemed to make any money, possess a driver's license, or bring any family around. She had no doubt he had a billion-dollar art collection, even if she was annoyed he would refuse to sell off a piece or two when money got tight.

She was questioned at length about one particularly bizarre story he told. He said a fall down some stairs left him mute as a child -- until he saw a dog and spontaneously uttered "woofness" at age 10. She did acknowledge on the stand that she considered "woofness" to be a "stupid word."

And, she said she didn't question him when he told her that asking people to pay him for work he did was beneath the dignity of a Rockefeller.

She initiated divorce proceedings after hiring a private investigator in 2006, who determined that her husband definitely was not who he said he was. He agreed to part, surrendering custody of their daughter for $800,000, two cars, her engagement ring and a dress he had given her.

On July 27, during an agreed-upon custodial visit, he allegedly abducted Reigh.

"I was completely traumatized," Boss said. "I was hysterical."

Denner questioned Boss at length about his client's mental state during their marriage. She said he told her in 1999 that he thought he was having a nervous breakdown folowing the Asian market collapse. They moved from New York as a result.

But, despite the defense attorney's prodding, Boss would not characterize her former husband as delusional.

"The defendant was often very unpleasant -- lack of empathy, anger, control issues, absolutely. I'm not a psychologist, but he was hard to live with ... I saw behavior that made me think that he wasn't at all well, yes," she testified.

Again, Denner suggested that her situation did not make sense, pointing out, "You are a consultant with one of the most prestigious companies." Boss replied: "I come from a place where you don't even jaywalk. It never occurred to me that I was living with someone who was lying to me."

She added, "He was lying to a lot of people."

She was followed to the stand by FBI experts and another former wife. The defense case could begin Wednesday.