(CNN) -- An Arkansas man suspected in a shooting that killed one soldier and wounded another at a Little Rock military recruiting center was angry over the treatment of Muslims, authorities said Tuesday. 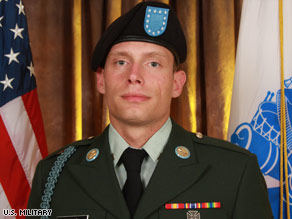 Abdulhakim Bledsoe, 23, of Little Rock, also told police he recently watched a video "pertaining to subversive activities which spurred him to commit this act," according to court documents.

Bledsoe pleaded not guilty at his arraignment Tuesday and was ordered held without bail.

He faces one count of capital murder and 16 counts of engaging in a terrorist act, said Little Rock Police Chief Stuart Thomas. The terrorist counts stem from the shots fired at an occupied building.

Watch scenes from Tuesday in court »

Before the not guilty plea, authorities said Bledsoe waived his Miranda rights after the shooting Monday and gave a video statement indicating that "political and religious" motives were involved.

He "stated that he was a practicing Muslim ... that he was mad at the U.S. military because of what they had done to Muslims in the past," homicide detective Tommy Hudson said in a police report.

Bledsoe told police "he fired several rounds at the soldiers with the intent of killing them," according to Hudson's report.

The suspect is a Muslim convert who has also gone by the names Carlos Bledsoe and Abdulhakim Mujahid Muhammad. He changed his name from the latter April 23, citing religious reasons, court records show.

A leader of the Muslim community in Little Rock said he did not know Bledsoe.

The suspect had been under investigation after visiting Yemen, a federal law enforcement official said. The official declined to provide further information.

Kent Krause, Bledsoe's public defender, said a formal hearing would be held for his client, but no date has been set.

Residents left flowers and miniature American flags outside the recruiting center after the shooting. A lone candle burned on the sidewalk next to bouquets of white and red roses. A note that said "Thank you for your service" was attached to the flowers.

The shooting Monday killed Pvt. William Long, 23, of Conway, Arkansas, and wounded Pvt. Quinton Ezeagwula, 18, of Jacksonville, Arkansas, who were outside the military recruiting center.

Bledsoe told police he was driving around and saw Long and Ezeagwula smoking outside the building, according to Hudson's report. He said he pulled into the parking lot and shot the two soldiers and added that "he would have killed more soldiers if they had been on the parking lot," according to the report.

Ezeagwula was in stable condition Tuesday, the police chief said.

Under the program, soldiers tell their stories to potential recruits. It's a volunteer position taken while soldiers are visiting or based back in their home region, Artis said.

"I'm relieved there's a suspect in custody," said Capt. Matthew Feehan, commander of the recruiting center. He said several people were in the building at the time of the shooting, but nobody else was injured.

Bledsoe was arrested after officers on Interstate 630 pulled over his car, which matched witnesses' description of a black Ford sport utility vehicle seen leaving the scene of the shooting.

The victims were shot with an SKS rifle, according to the police report.

Melvin Bledsoe of Memphis, Tennessee, was listed on the police report as Bledsoe's father. He declined to comment, referring questions to Little Rock police.