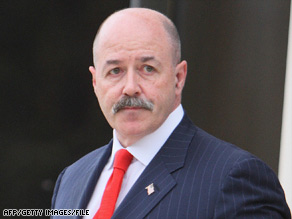 Kerik, who served as commissioner from 1998 to 2002, allegedly gave false and misleading answers to Bush administration officials about his relationship with contractors who renovated his Riverdale apartment, according to the indictment handed up by a Washington grand jury.

Prosecutors allege Kerik received and concealed benefits of about $255,000 in renovations to his home from contractors seeking to do business with the city of New York.

In December, Kerik pleaded not guilty to another indictment in New York levying similar charges against him, but those charges were dismissed because the incident allegedly happened in Washington, officials said.

He said his client is confident he will be vindicated.

Kerik , 53, is a longtime friend and former protege of former Mayor Rudy Giuliani.

Then-President George W. Bush nominated him for secretary of Homeland Security after winning re-election in 2004, but Kerik withdrew his name amid allegations that he employed a nanny who had questionable immigration status.