(CNN) -- A 23-year-old woman suffocated her son and then buried his body beneath the sand of a playground, police in Albuquerque, New Mexico, said Thursday. 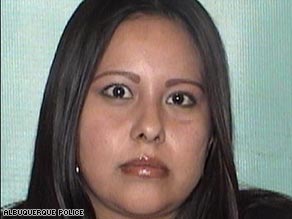 Tiffany Toribio, 23, was arrested and charged with killing her son.

Police arrested Tiffany Toribio about 4 a.m., just hours after they said they wanted to speak to her about her missing 3-year-old son, Ty.

Family members had contacted authorities, saying her son matched the description of a boy found Friday at an Albuquerque playground.

Police Chief Ray Schultz said she confessed to killing the boy soon after being apprehended.

"She placed her hand over her son's mouth and nose and suffocated him. She had second thoughts about what she did. She performed CPR on her son, brought him back to life and then decided to go forward with that original act she had started to commit," Schultz said.

"What makes this story especially sad is, when asked the reason why she took Ty's life, Tiffany said that she did not want him to grow up with no one caring about him, the same way that she had grown up where nobody had cared about her."

An emotional Schultz added that Toribio has tried to kill herself since her arrest. She was being held in isolation at a detention facility and kept under observation, he said.

He added, "As you can see, this case has been very emotional for everybody in the department."

Toribio was charged with first-degree murder and an array of other charges, including abuse of a child under 12 that caused death.

The discovery of the body at Alvarado Park on Friday shocked the community, which dubbed the boy "Baby Justice" and "Baby Angel" as they rallied around his case.

Police released a composite image of the boy Tuesday, hoping to garner more leads in the case. They weren't able to release a photo of the boy because his body was so disfigured by the sand's heat.

Schultz said that after killing her son, Toribio dug a hole under gym equipment at the playground, moved the body and buried him in the shallow grave.

"Since that time, she's been walking the streets of the city of Albuquerque," he said.

The boy was wearing Arizona brand clothing, size 3T: nylon black running pants with red stripes, a red shirt with a monster truck on it and black, gray and lime green Skechers sneakers.

Toribio did not comment Thursday morning after her arrest as she was put in a police car.

Schultz said there had been no reports of child abuse filed against Toribio. But he said family members indicated that she did not express the typical love of a mother for her child.

"She did not show the normal relationship that you would see with a mother, son," he said.

This week, police had gone to residences where she had lived previously, but she wasn't there, Schultz said. Police had gone there after family members expressed concern because "they did not like the way Ty was being treated," the police chief said.