(CNN) -- A preliminary autopsy Thursday did not reveal any identifying information on remains found on the bank of a river, less than 30 miles from the homes of two missing Illinois women. 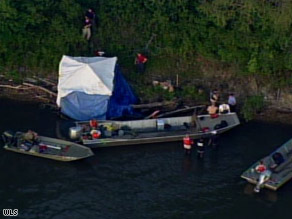 Partial skeletal remains were found on the south bank of the Des Plaines River near Channahon, Illinois.

The "partial skeletal remains" were found on the south bank of the Des Plaines River near Channahon, Illinois, according to Will County Coroner Patrick O'Neil's office.

A statement issued by O'Neil's office said a forensic examination was inconclusive as to identity, race or sex of the body parts, which consisted of a rib cage, spinal column and partial left and right femur bones.

A marine cleanup crew, which discovered the remains Wednesday, also found shreds of blue jeans and a small amount of money.

The Illinois State Police Forensic Crime Laboratory is expediting a DNA analysis, which will take at least two weeks, the statement said.

On Sunday, Michelle Williams found a blue barrel in Channahon, Illinois, along the river and called police.

Williams said she didn't initially make any connection regarding the barrel, but she did call police.

"It wasn't until yesterday afternoon when the news broke that there had been skeletal remains washing up on shore and that far away from the blue barrel, I had a sick feeling to my stomach when I heard that," Williams told CNN's Nancy Grace.

Stacy Peterson disappeared in October 2007. Her husband has been named a suspect in her disappearance, but he has maintained his innocence, saying she left him for another man.

Stacy Peterson, 23 when she was last seen, was Drew Peterson's fourth wife. This month, Drew Peterson, 55, was indicted on murder charges in the 2004 death of his third wife, Kathleen Savio, while the two were in the midst of a nasty divorce. He has pleaded not guilty.

Savio's death was originally deemed an accident, but authorities took a second look at the case after Stacy Peterson's disappearance.

Channahon is also 15 miles from Plainfield, Illinois, where Lisa Stebic was last seen in April 2007.

On the day she went missing, she petitioned a court to have her husband, Craig, evicted from their Plainfield home. Craig Stebic told police he was working in the backyard when his 37-year-old wife left home about 6 p.m., taking her cell phone and purse.

Authorities have said they believe that Lisa Stebic was the victim of foul play and have named Craig Stebic a suspect.