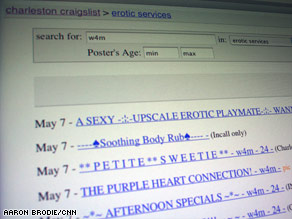 Five women also were named in the indictment, identified as bookers for the alleged prostitution ring.

It was not immediately known if those charged had hired legal counsel.

Five of the defendants appeared in court Wednesday afternoon, Cuomo's office said. Authorities are still searching for two, who have not yet been arrested.

It was not immediately clear which two had not been arrested.

Craigslist, an online classified-ad site, was the "sole vehicle through which the company operated," Cuomo's office said.

The advertisements contained either a pornographic or semipornographic photograph and a phone number to call to "arrange a date."

The bookers used codes for its services when potential "johns" called: "GFE" for "girlfriend experience" or "skiing" and "rock climbing" for drugs, Cuomo's office said.

While Room Service Entertainment was running, it employed 10 drivers and 16 prostitutes on "any given day," according to the indictment.

Over the course of its existence, 20 to 30 prostitutes and drivers were employed by Room Service Entertainment, the indictment said.

The "johns" paid for sex by cash or by credit card, and Room Service Entertainment masked the credit card transactions through a Chase merchant account, the indictment alleged. The charges were purported to be for magicians, clowns, balloons or disc jockeys, it said.

If convicted on the top count of enterprise corruption, all could face up to 25 years in prison, Cuomo's office said.

"Until Craigslist gets serious about putting real protections in place, it will continue to be an environment where criminal operations thrive with impunity," Cuomo said in a written statement.

"Even after so-called reform of the Web site last fall, this prostitution ring easily gamed the system and allegedly used Craigslist to spread its illegal operation throughout all five boroughs and beyond."

Buckmaster said the new measures have driven the advertisements to other services.

All About Craigslist Inc. • Internet • Pornography