Milwaukee police on hunt for serial killer linked to 7 deaths

(CNN) -- Police in Milwaukee are working to track down a serial killer linked to at least seven unsolved homicides dating back more than two decades, authorities said. 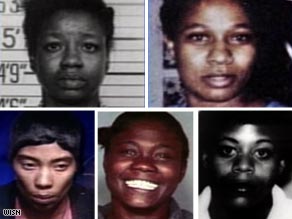 Law enforcement officials in the Wisconsin city have matched the unknown man's DNA with seven women -- six prostitutes and a runaway involved in the drug trade. The deaths occurred between 1986 and 2007.

"Six of the victims were women who were working as prostitutes -- high-risk behavior that makes them vulnerable to crime," authorities said.

Police believe the killer had sex with the runaway, but she was killed by someone else.

The developments have prompted officials to form a local, state and federal task force to investigate the homicides. A state lab is working to determine whether the DNA of at least 23 other slain prostitutes matches that of the killer.

"In the past, we might have linked some of these homicides through their method of operation, but theory has given way to technology," said Edward Flynn, the Milwaukee police chief. "Within the last couple of weeks, we have been able to confirm a link."

Flynn, who described the killer as an "unknown suspect who conducts his business in secret," said the investigation would require tips from the community.

"This suspect has been able to avoid and evade law enforcement for these last 23 years. He has never been arrested for a felony as he does not appear in any DNA database," Flynn said.

Police said 42 prostitutes were killed between 1986 and 2007, and that 31 percent of the cases have been solved. There has been a higher clearance rate -- 78 percent -- in other homicides.

Flynn said there have been "patterned homicides" discovered across the country as a result of advanced DNA technology, citing investigations in Los Angeles, California; Mesa, Arizona; and Las Vegas, Nevada. However, he said there is no link with the Milwaukee cases.

In discussing advances in DNA technology, Flynn said there were no matches in 1990s, two around 2000 and the seven have been linked in recent weeks.

"We already have determined that five suspects in murders of other prostitutes -- completely unrelated to this investigation -- have been identified because their DNA match open homicide cases. Three of them already are in prison for cleared homicides of prostitutes," police said in a statement Tuesday.

All About Murder and Homicide • Serial Killers • Crime