PHOENIX, Arizona (CNN) -- Jaime Andrade had just gotten out of the shower when the men came to snatch him. 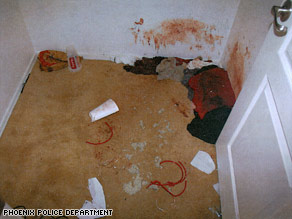 Jaime Andrade was kept in this closet for three days without food or water, police say.

His wife, Araceli Valencia, was mopping the kitchen in their family home on a typical warm spring morning in Phoenix, Arizona, "when she suddenly felt a hard object pointed to the back of her head and a voice in Spanish tell her not to move," according to a Phoenix, Arizona, police investigative report.

"I told you not to look at me!" Valencia heard one of the kidnappers bark as he struck Andrade across the head.

Her four children bawling, Valencia was hustled into a bedroom where an armed man fondled her and threatened to rape her if she didn't tell him where Andrade hid his money, according to the report.

After beating and binding Andrade, one of the kidnappers put a gun to Valencia's head. His message: We're taking your husband and SUV. We'll be watching your house. If you call the cops, he's a dead man.

Andrade, his wife would later tell police, was a mechanic and freelance human smuggler, or coyote. Police say his 2006 kidnapping was evidence of a growing trend in Phoenix: drug and human traffickers abducting each other for ransoms or retribution.

The trend continues, as police investigated roughly a kidnapping a day in 2007 and 2008 and are on track to shatter those numbers this year. Police are stingy with details of fresh cases navigating the court system, but recently allowed CNN to review the files from Andrade's kidnapping.

For two and a half days after Andrade's abduction, the kidnappers -- including a man whom Andrade later said had been a friend -- deprived their victim of food and water. Through the door of the closet where he was held, Andrade could hear the cries of other victims being tortured in the house, the report said.

This is the second in CNN.com's four-part series on drug cartels.

Meanwhile, Valencia had defied the kidnappers and called police, who listened to Andrade "scream and howl in pain" over the phone as the kidnappers tried to cut off his ear and a finger. The torture would continue until Valencia came up with the ransom, the kidnappers told her.

They were true to their word.

Andrade was pistol-whipped and beaten with a baseball bat and the butt of a rifle. The kidnappers tried to gouge out his eye and slashed open his left eyebrow. They burned his back as well -- presumably, police said, with a blowtorch found at the scene. Read how the next door neighbors knew nothing of this

The blindfolded Andrade "could feel his pants and underwear being cut open by an unknown person," he told police. He was told to bend over and was beaten when he refused.

"Jaime felt his legs being forced apart and heard Aldo say he was going to get his money," the report said. The kidnappers then sodomized him with a broomstick, a pair of scissors and a wooden dowel used to hang clothes in a closet.

Ferocity is often a hallmark of the abductions taking place in this south Arizona city of 1.5 million that serves as a prime transshipment point for drugs and human cargo.

Watch how the kidnappers choose their targets »

Phoenix police say they have yet to witness the level of violence -- the beheadings, the bodies shoved in drums -- that their counterparts are seeing in Mexico City or the border town of Juarez.

Kidnappers will smash their victims' fingers with bricks, snip their backs open with wire cutters, carve them up with knives or simply shoot them.

"We've had them electrocuted. They set them in a tub with water and use kind of barbaric means and zap the tub. I think it was a battery hooked up," Burgett said.

Two kidnappings last year resulted in murders, she added, but it's not the norm.

"It's all about the money. And there's so much money to be made in this that you can't stop it, but you can try to reveal it, and then you can try to do something about it," Burgett said.

The task force has made dozens of arrests, but as of March 31, the city had 101 reported kidnappings. If the trend continues, Phoenix will record an increase in kidnapping for a fourth straight year.

More frustrating is that the numbers represent only a third, maybe less, of the city's kidnappings, said Sgt. Tommy Thompson, a police spokesman with 16 years of drug enforcement experience. Most kidnappings aren't reported, he said, because the victims are generally smugglers, drug dealers or illegal immigrants -- or some combination of the three.

The most common cases are criminal-on-criminal -- drug smugglers or coyotes snatching rivals or their loved ones. In some cases, a drug dealer may have lost a load or failed to make a payment, but there are also cases when kidnappers do it solely for the ransom, which can be between $30,000 and $250,000, Thompson said.

"[The victims are] wearing the doper bling-bling, and they target them," he said. "We've had several cases where the ransom amount has been $1 million that the person has asked for. In addition to that, they often ask for drugs -- 100 pounds of marijuana, perhaps a pound or two of speed, a pound or two of cocaine or several ounces of heroin."

Phoenix police have even arrested victims after rescuing them, Burgett said.

Less frequent but still accounting for 78 kidnappings last year are cases in which coyotes hold their human cargo captive or steal another coyote's patrons, known as pollos (Spanish for chickens), Burgett said.

Burgett said human trafficking is often linked to the drug trade because both industries require the same routes and subterfuge to ferry their wares into the country. See what other cities have a cartel presence

There are rarely "true victims" in Phoenix's kidnappings, the lieutenant said.

However, one criminal attorney who has represented at least 10 kidnappers in the last decade insists that the coyote business is "uglier than the drug trade" and that pollos are often killed or forced to do coyotes' bidding when they can't come up with the ransoms.

Though many might debate the innocence of victims entangled in Phoenix's border-related violence, police say there have been instances when the kidnappers snatched the wrong mark.

On the evening of March 17, 2008, a 13-year-old girl and her friend were walking out of a home in the suburb of Avondale. They were planning to play basketball. The friend, according to a police investigative report, was the niece of a man named "Chucky."

Chucky and his cohorts, witnesses told police, had earlier stolen 55 pounds of marijuana and left several men tied up in a vacant house.

Hours later, the investigative report said, armed men arrived at Chucky's sister's house in three vehicles, one a white Chevrolet Tahoe with blue-and-red strobes like the police use.

The men wanted Chucky, their drugs or $24,000. The 13-year-old said she didn't know Chucky. When she tried to walk away, "one of them grabbed her by the neck, pointed a gun at her and forced her in the vehicle," the report said.

Eventually, the men called the girl's mother to demand ransom. A police officer took the phone and informed the men they had the wrong girl. She was released relatively unharmed in the suburb of Surprise.

The case serves as a reminder that as police scramble to tamp the bloodshed before it reaches the levels proliferating south of the border, collateral damage is a reality.

Watch how the kidnapping often occur in quiet neighborhoods »

The origins of the kidnappers -- 90 percent of whom hail from the Mexican state from which the notorious Sinaloa drug cartel takes its name -- also remind law enforcement that 150 miles south lies a country racked with a more extreme brand of violence.

The tortured Andrade was fortunate that police were able to find him. On Andrade's third day in captivity, an undercover officer posing as a loan shark convinced the kidnappers to lower their ransom from $50,000 to $10,000 and the title to the Ford Expedition they had stolen.

When the kidnappers arrived at the drop point, a Safeway supermarket parking lot, police swarmed on their green Chevrolet Tahoe, the report said. One of the men, Luis Alberto Castro-Vega, then 23, disclosed Andrade's whereabouts after police promised not to charge him with kidnapping.

Only Castro-Vega has been convicted of crimes associated with Andrade's kidnapping: first-degree burglary, theft by extortion, armed robbery and three counts of aggravated assault. In September 2006, a judge sentenced Castro-Vega to 54 years in prison.

Thompson said he hopes the stiff sentence sends a message that Phoenix police expect the kidnappings and violence to end, regardless of the targets and the perpetrators.

"The problems that occur when it's criminal versus criminal, that's still violence on the streets of America," he said. "If those people get in a gunbattle, those bullets have to go somewhere, and that could be a playground where kids are playing. That could be a neighbor's house where a neighbor is inside sleeping that has nothing to do whatsoever with the illegal activity, but yet they become senseless victims of the violence."