Suspect arrested in shooting of rapper Dolla at L.A. mall 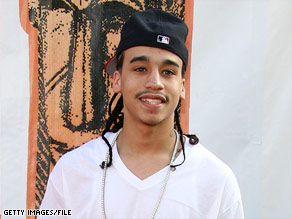 Dolla, whose real name is Roderick Anthony Burton II, was shot in the head about 3:10 p.m. at the Beverly Center, his publicist said.

No other details were given about Berry, who was arrested on suspicion of murder.

Dolla, who was based in Atlanta, Georgia, was in Los Angeles recording his debut album.

He caught the attention of multiplatinium R&B singer Akon when the then-12-year-old Dolla was performing with friends at showcases around Atlanta.

The two collaborated on Dolla's first single, "Who the F--- is That?" which also featured another high-profile singer, T-Pain.

Another Dolla song, "Feelin' Myself," appeared on the soundtrack to the 2006 movie "Step Up."

According to his MySpace page, Dolla was born in Chicago, Illinois. His twin sister died at birth due to complications from an enlarged heart.

The family moved to Atlanta after Dolla's father committed suicide -- while Dolla, then 5, and another sister watched from their parents' bed, the Web page said.

Dolla began composing rhymes in elementary school and decided to pursue a career in music.

A source close to the record company said Dolla had just arrived in Los Angeles to work on his debut album.

Funeral services, which will be held in Atlanta, will be announced later, publicist Sue Vannasing said.

All About Los Angeles • Hip-Hop and Rap • Atlanta