CHICAGO, Illinois (CNN) -- The Rev. Michael Pfleger has ordered the American flag at St. Sabina Church hung upside-down -- a historic sign of distress -- to symbolize the growing death toll among the city's youngsters. 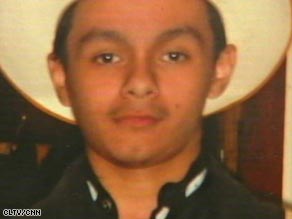 Alex Arellano was beaten, burned and shot in the head last week. He was 15.

So far this school year, 36 children and teens have been murdered -- more than one a week -- and Pfleger is among a chorus of weary Chicagoans who say the slayings aren't getting the attention they deserve.

Had 36 kids died of swine flu this year, "there would be this great influx of resources that say, 'Let's stop this, lets deal with this,' " Pfleger said.

Instead, because violence is driving the epidemic, "We're hiding it. We're ignoring it. We're denying the problems," he said.

Pfleger is not the first Chicagoan to express the sentiment. In 2007, after the city recorded 31 murdered children during the school year, Arne Duncan, then-CEO of public schools, expressed similar disappointment.

Duncan, who now serves as President Obama's secretary of education, said "all hell would break loose" if these killings took place in one of the metro area's upscale enclaves.

"If that happened to one of Chicago's wealthiest suburbs -- and God forbid it ever did -- if it was a child being shot dead every two weeks in Hinsdale or Winnetka or Barrington, do you think the status quo would remain? There's no way it would," he said.

Yet the problem has only worsened since Duncan publicly shared his observation. With about a month left in the school year, Chicago's public schools have topped the number of students slain in the 2007-2008 and 2006-2007 school years -- 27 and 31, respectively.

One of the most disturbing slayings came last week when the family of Alex Arellano found the 15-year-old's body. He had been beaten, burned and shot in the head.

"It's sad because they didn't have to torture him that way. He never did nothing wrong, never. He was a good kid. It just gets to me. It's crazy," Alex's friend Ashley Recendez said.

Indeed, police say the teen had no criminal record, no gang affiliation. His family says he was well-behaved and shy, almost fearful of strangers. They had recently taken him out of school to protect him after gang members threatened him.

He was last seen May 1, leaving his girlfriend's house. His girlfriend told his family that several young men chased him and beat him with baseball bats. She didn't know why.

The family found his brutalized body in an alley the next day, which at the time made Alex the 34th child slain this school year in the city, according to an unofficial tally kept by the Chicago Tribune.

"Why would they do this to a child that has nothing to do with nothing, and just, on top of that, brutally killing him?" asked Alex's uncle Juan Tirado.

Chicago Police Superintendent Jody Weis said scuffles among youth have become more violent and a conflict that 20 years ago would have warranted a pushing or wrestling match now sometimes results in gunfire.

"There's simply too many gangs, too many guns and too many drugs on the streets," he said. "We've got a problem with some of our young people are resorting to use of weapons and violence to solve any type of conflicts they may have."

Weis said he concurred with Duncan's remarks from two years ago and bemoaned that society had become desensitized, almost to the point of acceptance, by the violence in some of America's major cities.

"That is a very sad state of affairs," he said.

Watch how Chicago is struggling with the violence »

But not all officials are convinced the level of violence against children is unique to Chicago.

Mayor Richard Daley said the numbers appear worse in his city because the public school system considers teenagers students even after they drop out.

"The rest of America doesn't count them. You're a dropout forever. We don't think they're dropouts. They're students," he said.

He further said Chicago's problems are no worse than those in any other American city.

"It's all over, the same thing," he said. "You go to a large city or small city, it's all over America. It's not unique to one community or one city."

Despite Daley's remarks, CNN has learned that none of the city's 36 victims this year was a dropout.

Also, Daley's statistics on the number of youths killed in other cities don't appear to match reports from American cities.

In 2007, Diane Latiker, founder of the community group Kids Off the Block, began a memorial on a vacant lot in Chicago. She bought 30 landscaping stones and wrote the name of a slain school-age child on each of them.

Her hopes were that the stark sight of the memorial would shock the city into action.

Today, the memorial includes 153 stones, some for children as young as 10, and there is little indication the pace is waning, as at least two children were killed since Alex Arellano's body was found Saturday.

Asked who was failing the kids -- police? schools? city officials? -- she replied flatly, "We all are."

Other community activists said they're at a loss to find any simple explanation. In May 2007, public outrage overflowed after the death of 16-year-old Blair Holt, an honor student and aspiring songwriter.

According to various media reports, Holt was riding a city bus when a gunfight erupted between two gang members. Holt tried to shield a young girl who was in the line of fire and was fatally shot in the stomach.

His death sparked public protests, and grieving family and activists listed a host of scapegoats: lax gun laws, insufficient policing, bad parenting. But two years later, families and activists say they're tired and discouraged by the torpid pace of change.

Lakeesha Stevens, whose son was shot as he slept in the car last year, said, "It can happen to anyone... you can be walking, you can be anywhere."

Fortunately, Martrell Stevens survived the shooting, but kindergarten proved a lot tougher for the youngster after the bullet left him partially paralyzed.

Weis said Chicago police work tirelessly to keep the violence out of the schools, and he expressed relief that the city is "providing a safe place for our young folks to learn."

However, he acknowledged that the conflicts sometimes begin in the schools and are finished off-campus. The violence will continue to be a priority for Chicago police, he said.

"I can promise you the Chicago Police Department is outraged and we will continue to work these cases with high energy and a great deal of enthusiasm," he said.

CNN's Abbie Boudreau and Ismael Estrada contributed to this report.

All About Chicago • Child Safety • Murder and Homicide