(CNN) -- Drew Peterson, the former police sergeant who authorities call the prime suspect in the disappearance of his fourth wife, Stacy Peterson, has been indicted on murder charges related to his third wife, Kathleen Savio, the Illinois state attorney's office said. 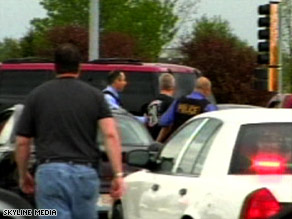 Illinois State Police said Peterson was taken into custody about 5:30 p.m. Thursday after a traffic stop near his home.

Police had staked out his home all day, said police Capt. Carl Dobrich, but waited for Peterson to leave to arrest him out of concern for his three children, who were inside the house.

Peterson, through his attorney, denied any wrongdoing in either case.

Wills County State's Attorney James Glasgow said he believes the case is strong and said Peterson is being held on $20 million bond.

"This is an extremely grave and serious matter and it is reflected in the bond," Glasgow said.

Peterson's attorney Joel Brodsky told CNN's Larry King he believed the bond was excessive and would seek a more "reasonable" bond, noting it was the most expensive bond he'd seen in 10 years.

Charles B. Pelkie, spokesman for the state's attorney in Will County, Illinois, said a grand jury indicted Peterson in the murder of Savio, whose death had been ruled an accidental drowning.

Brodsky said in a written statement that prosecutors won't be able to prove their case because "he didn't do it."

"There is no evidence that links Drew Peterson to the death of Kathleen Savio or anyone else for that matter," Brodsky said. "Drew did not harm Kathleen; he has said so from Day One. We're obviously disappointed a grand jury indicted him. But an indictment does not mean guilt."

Pelkie said the grand jury continues to meet and is studying the possibility of charges in Stacy Peterson's disappearance.

Savio died just before the division of the marital assets was finalized, making Drew Peterson the sole beneficiary.

Brodsky told King he believes the case has always been about circumstantial evidence and that he will bring a pathologist to trial who will say Savio died from an accidental drowning.

Kathleen Savio's brother, Nick, told CNN affiliate WLS-TV he received a call from his sister saying Peterson had been arrested.

"The state police had been telling us the day was coming," he told WLS-TV. "We kept hearing it for about eight months. I'm almost in tears here. It's been so hard for our family."

"Hopefully, we'll get the justice we've always been waiting for."

Martin Glink, attorney for the Savio family, said they were hopeful the grand jury felt there was enough evidence to charge Peterson.

"We're very happy that the wheels of justice have continued to move and they are pointing in his direction," Glink told WLS-TV.

The news was also bittersweet for Stacy Peterson's family, who continue to wait for news about her disappearance.

"We have anticipated this coming. We have dreamed about it. We have been patient over it," Pam Bosco, spokesperson for Stacy Peterson's family told WLS-TV. "Now that it's here, it's almost a little bit calm. We're waiting for the storm to calm now. The calm before the storm."

Bosco said while she had not heard about any charges relating to Stacy Peterson's death, she was hopeful those charges would follow.

"We always said from the very beginning that Kathleen and Stacy had one thing in common -- and that was Drew Peterson," she said. "So, hopefully, we'll have news soon about Stacy, too."

Ernie Raines is also relieved about the arrest. His daughter, Christina Raines, is dating Peterson and was living with him before his arrest. Ernie Raines told CNN's Anderson Cooper he was with his daughter and Peterson as recently as last week, when they talked about going to Las Vegas, Nevada, and getting married.

Thursday night he spoke with his daughter after the arrest.

"My daughter was terrified, very emotional, upset," Ernie Raines said. "And I tried to tell her from the beginning that this was going to happen, be prepared."

Ernie Raines said more than anything, when he heard about the arrest, he was relieved.

"I'm glad justice finally came -- before he hurt my daughter," he said.

Police put Peterson's three minor children in the custody of the state's children and family service department. His adult son was contacted, at Peterson's request, to take them, according to Capt. Dobrich.

Dobrich said Peterson cooperated with police during his arrest.