MIAMI, Florida (CNN) -- Everyone has heard of the worm at the bottom of the bottle, but what customs officials in Miami found kicked that up a few notches. 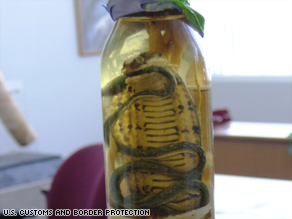 Customs officials in Miami seized what they believe is "snake wine," poisonous snakes bottled in alcohol.

United States Customs and Border Protection officers conducting a routine inspection on Wednesday seized a cobra and other poisonous snakes in a bottle believed to be "snake wine."

Customs officials said the snakes, mixed in a glass container containing some form of alcohol, were inside an express mail package from Thailand.

Jose Castellano, a spokesman for U.S. Customs and Border Protection, said the agency discovered the bizarre beverage during the course of what otherwise would have been an ordinary search.

As strange as the tale might seem, Castellano said it was just another day at the office.

"We're not just at airports checking passports," said Castellano, whose officers also confiscated cocaine hidden in a diaper the same day they found the snake wine. "We check mail, boats and planes to make sure that anything that can be harmful or illegal does not enter the United States," he said.

"Based on a risk management system, we decide what packages we look at, depending on where they are from, and a lot of different characteristics that would cause us to look into something," Castellano said.

The investigation into the unusual cocktail is being handled by the U.S. Fish and Wildlife Service. Importing cobras into the United States is illegal because they are an endangered species.

"It is wildlife that was not declared," said Eddie McKissick, a spokesman. "The issue is that this species of snake is protected by the convention on international trade in endangered species. It applies to live and dead animals."

"We see this all the time," he added. "Not just the cobras, sometimes it's turtles and even dried sea horses."

Customs officials said the practice of producing an alcoholic beverage that includes a whole venomous snake in the bottle originated in Vietnam and is popular in Southeast Asia.

Officials said the entire snake is submerged in the alcohol, often with insects or other animals such as turtles.

The snakes, preferably venomous, are not usually preserved for their meat, but to have the snake poison dissolved in the liquor, which is then used for medicinal purposes, officials said.

Federal officials said the package was shipped from Thailand to an address in the southeastern United States. Authorities declined to reveal where or to whom the package was destined.

The package, like all international mail, was inspected when it reached the regional Customs inspection site in the area for which it is destined. Once inspected, mail is turned over to the U.S. Postal system.

McKissick said importation of endangered species into the United States requires a permit and proper procedures have to be followed.

"If you have a demand for a wildlife species, someone has to go out and kill that species, so the regulations apply," he said. "These species require an export permit that they did not have."