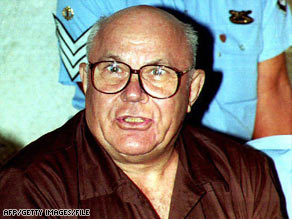 John Demjanjuk's lawyers have filed an emergency motion for a stay of deportation with the Supreme Court.

The ruling came as Demjanjuk's lawyers formally asked the U.S. Supreme Court to halt the deportation.

The Administrative Court in Berlin ruled that Demjanjuk lacks a basis for legal protection and declared his motion for a stay to be inadmissible.

"Even without the agreement of the Federal (German) Government, he could be deported from the USA," the court said. "Following his arrival in Germany the return of the petitioner (to the USA) would be out of the question because the Federal Republic has the obligation to arrest the defendant on the basis of the arrest order already in effect."

Demjanjuk was charged in Munich, Germany, in March with assisting in about 29,000 murders while serving as an SS guard in the Sobibor death camp in Poland in 1943.

In the United States, Demjanjuk's effort to avoid being sent to Germany has repeatedly been turned down by federal courts, and he now appears to be down to his final appeal.

His lawyers formally filed an emergency motion for a stay of deportation with Supreme Court Justice John Paul Stevens. The attorneys also asked for the court to then consider the health issues and other arguments that have been rejected by the lower courts.

Demjanjuk's attorney, John Broadley, has argued that deporting him would constitute torture because of his health problems. Broadley has said Demjanjuk suffers from pre-leukemia, kidney problems, spinal problems and "a couple of types of gout."

Justice Department lawyers have said that videos show Demjanjuk's condition is not as bad as Broadley has portrayed it.

The case dates back to the late 1970s, when the Justice Department accused Demjanjuk of being a Nazi guard known as "Ivan the Terrible." Demjanjuk's U.S. citizenship was revoked in 1981, and he was extradited to Israel in 1986.

He was convicted in an Israeli court in 1988 and sentenced to death, but that conviction was overturned in 1993 amid evidence that someone else was Ivan the Terrible.

A federal court restored Demjanjuk's citizenship, ruling the government withheld evidence supporting his case. But his citizenship was revoked again in 2002 after a federal judge ruled he entered the United States illegally in 1952 by hiding his past as a Nazi guard.

Demjanjuk, a Ukrainian, denies any role in the Holocaust. He says he saw action in the Soviet army and later was a prisoner of war held by the Germans.