LOS ANGELES, California (CNN) -- A man who Los Angeles police believe raped and murdered dozens of women decades ago was arrested by cold case investigators this month after a computer matched his DNA to evidence from two killings in the 1970s. 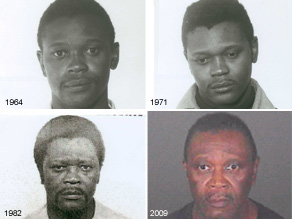 John Floyd Thomas Jr. may have begun his killings as far back as 1955.

John Floyd Thomas Jr., 72, may have begun his killings as far back as 1955 and he could be one of the worst serial killers in United States history, according to Los Angeles Police Chief William Bratton.

"We have yet to reach the depths of what he has done," Bratton said Thursday.

Until his April 2 arrest, Thomas was a Los Angeles insurance adjuster. Police now call him the "Southland Strangler" -- named for the geographical section of Los Angeles County where they suspect he killed at least 30 women and raped many more.

Thomas, who sits in a Los Angeles jail, has been charged with two killings -- in 1972 and 1976 -- but prosecutors will likely add more cases when he faces arraignment on May 20, Bratton said.

While Thomas was arrested "a number of times between 1955 and 1978" for sex crimes and burglaries, detectives did not have the technology to identify him as a suspect when the region was terrorized by a series of killings then blamed on the "Westside Rapist," Bratton said.

Watch why the suspect may be L.A.'s most prolific serial killer »

Bob Kistner had just begun his law enforcement career in 1976 when his great aunt, 80-year-old Maybelle Hudson, was beaten, raped and strangled in the garage of her Inglewood, California, home.

He had just retired as a sergeant with the Long Beach, California, Police Department when he got the call recently that investigators linked Thomas to her murder.

"I waited my entire career for that phone call," Kistner said.

It was a routine call to Thomas from an LAPD officer last fall that led to the break in the case.

Thomas, a registered sex offender, is required by California law to provide a DNA sample for inclusion in the state's database.

Because of a backlog of cases, Thomas was not asked until October to report to a patrol station to have the inside of his cheek swabbed.

"He was very cooperative," the patrolman who took the sample said.

The California Department of Justice called LAPD cold case detectives on March 27 to tell them the DNA came up as a match to rape kit evidence collected from Ethel Sokoloff, who was 68 in 1972 when she was found beaten and strangled in her Los Angeles home.

Those detectives had sent the biological evidence from the Sokoloff case to a state lab in 2002 as part of their review of about 6,000 unsolved murders in Los Angeles that happened between 1960 and 1996.

The murders of three other older women -- including Maybelle Hudson -- were also linked by DNA to a common killer, he said.

"Because of Thomas's criminal background, the close proximity of his homes to murder locations, similar victim descriptions [white elderly females] and other evidence that suggests the type of modus operandi used by the suspect, detectives strongly believe Thomas is very likely the suspect in 'The Westside Rapist' cases," a police statement said.

Thomas is single, although he has been married five times, police said.

While he served about 12 years in prison between 1955 and the late 1970s for his previous convictions, he has no record since his last arrest in 1978, police said.

Deputy Chief Beck said the growing use of DNA databases and computers to match them to crime evidence will likely lead to more cold case killers being identified.

All About Los Angeles