ATLANTA, Georgia (CNN) -- An Atlanta, Georgia, lawyer, whose well-publicized bout with tuberculosis caused an international health scare, is suing the Centers for Disease Control and Prevention for invasion of privacy. 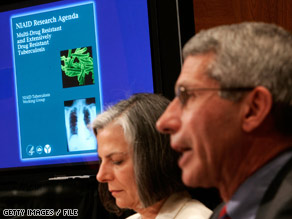 In the suit filed this week, Andrew Speaker alleges that the CDC released his name and sensitive medical information to the media in 2007, an act that harmed his reputation, his occupation and led to the ruin of his marriage.

Speaker did not specify a dollar amount he was seeking in damages in the suit filed in U.S. District Court in Atlanta, Georgia.

On May 29, 2007, the CDC held a press conference stating a patient with a rare form of tuberculosis, extensively drug-resistant TB which often proves fatal, had taken an international flight.

The CDC, the suit alleges, did not in that press conference or other press conferences, tell the public that the organization told Speaker that he was not contagious and that the CDC knew Speaker had planned to take the trip to Greece for his wedding.

Instead, the CDC unlawfully released extensive information about Speaker such as "the fact that he had flown to Greece to get married, the fact that he was a lawyer in Atlanta, and most importantly, his identity -- none of which needed to be released to the general public in order to accomplish any legitimate public health purpose," the suit said.

On July 3, 2007, Speaker's doctors changed his diagnosis to multi-drug resistant TB, a less dangerous but still potentially fatal form of the illness.

The suit alleges that the CDC's inaccurate release of information about him caused major harm.

"Speaker became the object of unwanted public attention, including expressions of public scorn and contempt (including death threats) due to the inaccurate light in the information presented, resulting in so much strain on his marital relationship that he and his new bride parted ways after the wedding but before filing the marriage license," the suit alleges.

All About Andrew Speaker • Tuberculosis • Centers for Disease Control and Prevention