(CNN) -- A crew member on a U.S.-flagged cargo ship captured by pirates off the coast of Somalia is suing his employers, claiming they sent him into pirate-infested waters without adequate protection, his attorney said Monday. 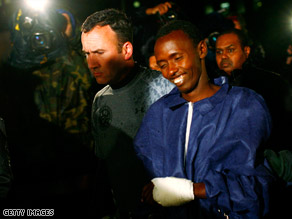 Abduwali Abdukhadir Muse has been charged with piracy in federal court in New York.

The Maersk Alabama was hijacked by pirates April 8. Hicks, working as chief steward and preparing food for other crew members, heard over the loudspeaker that pirates were on board, and he and other crew members gathered in the ship's engine room for nearly 12 hours, according to a news release from Bryant.

"The engine room was dark and hot, maybe 130 degrees," Hicks said in the news release. "We were all cramping up with heat stroke symptoms when we were able to take a pirate hostage and tried to negotiate the return of our captain."

The pirates promised to exchange Capt. Richard Phillips for the pirate hostage, but reneged on that agreement, the news release.

Phillips offered himself as a hostage in exchange for the freedom of his crew. He was held on a lifeboat until U.S. Navy snipers on a nearby ship fatally shot three pirates, rescued Phillips and arrested a fourth pirate.

The ship's owners -- the two companies -- knowingly exposed their employees to danger and took no steps to provide appropriate security and safety for the crew, Bryant alleges.

"Waterman Steamship Corp. and Maersk Line Limited chose to rely on the United States military and taxpayers to provide after-the-fact rescue operations," Bryant said in the news release. "This choice caused substantially more cost and risk to human life than what would have been incurred by defendants had they provided appropriate levels of security in the first place."

Hicks is seeking at least $75,000, and "reserves the right to amend this pleading for a certain amount in the future, as it is too early to determine the maximum amount of plaintiff's damages," according to the suit.

Hicks is still suffering from injuries as a result of the incident and is afraid to return to work, the news release said.