(CNN) -- A 22-year-old college student in Boston, Massachusetts, has been charged with murder in connection with the death of a woman who may have been contacted through a Craigslist ad, police said. 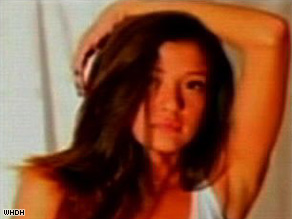 Philip Markoff, a pre-med student at Boston University with no criminal record, also was charged with the armed robbery and kidnapping of another victim, Police Commissioner Ed Davis announced Monday evening. Markoff, who was under police surveillance, was arrested earlier in the afternoon after a traffic stop south of the city, police said.

Markoff is suspected in the death of New York City resident Julissa Brisman, 26, who was found unconscious with multiple gunshot wounds at Boston's Copley Marriott Hotel on April 14. She was transferred to Boston Medical Center, where she died from her injuries shortly afterward.

The confrontation between Brisman and her killer seems to have begun as an attempted robbery, police said. "It appears that there was a struggle between the victim and the suspect in the threshold of the hotel room immediately prior to the shooting," the Boston Police Department said in a statement posted on its Web site.

Surveillance videos from the hotel where Brisman was murdered showed a tall, clean-cut young blonde man in a black windbreaker leaving the property, said the Boston Police Department, which had asked for the public's help in identifying the man.

Police did not release a photo of Markoff on Monday.

A police spokesman would not disclose the details of her Craigslist ad but said she and Brisman were "involved in similar professions."

"This is a compelling case with a myriad of evidence -- with computer evidence being a part of it," Conley said, adding that additional search warrants would be executed this week.

Markoff's arraignment was set for Tuesday morning at the Boston Municipal Court. It was not immediately clear if he had retained defense counsel.

Davis and Conley warned there may be other victims that come forward in the case.

Authorities received more than 150 leads in the case, which Davis credited to the popularity of the Web site.

"The public came forth, they were fascinated by this crime," he said, adding, "I wish we had this level of cooperation in every homicide that occurred."

Davis said Boston investigators were working with police in Warwick, Rhode Island, in what could be a related case.

On April 16 at a Holiday Inn Express in Warwick, Rhode Island, a man tied up and demanded money from a 26-year-old dancer who had posted a Craigslist advertisement, according to Warwick Police Chief Col. Stephen McCartney.

The robbery was interrupted when the woman's husband entered the room. After pointing his gun at the husband, the suspect fled, according to McCartney.

He said no conclusions could be made, but allowed that the incident "may be related to similar crimes occurring in the Boston area."

Craigslist CEO Jim Buckmaster said the company was "horrified and deeply saddened that our community services have been associated in any way whatsoever with a crime of violence."

He promised that Craigslist would evaluate the incident to see if additional measures could be introduced to further protect users.

All About Craigslist Inc. • Boston Police Department • Murder and Homicide