Her life over at 8, slain girl is remembered 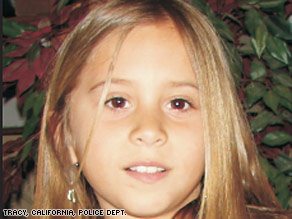 Sandra Cantu, 8, had been missing almost two weeks before her body was found.

The little girl made national headlines after she went missing March 27 from a mobile home park in Tracy where she lived with her family.

She was on her way to a friend's home and her playful skipping down an alley was caught by a surveillance camera. Police later found her body stuffed into a suitcase and submerged in a pond at a nearby dairy farm.

Photos of Sandra, flowers and stuffed animals covered the front of the stage. Family members, friends and state dignitaries memorialized the child during a ceremony that lasted just over an hour.

The printed program called the memorial service "A Celebration of Life," and organizers said they hoped the service would help ease the pain the community has suffered since Sandra's disappearance.

Cindy Sasser, principal at Jacobsen Elementary School told mourners, "We should all strive to be like Sandra -- always smiling, wanting to help, to look out for others and to be caring."

The service included a video that showcased some of the family's favorite photos.

People from across California attended, filling the gymnasium, cafeteria and the football stadium at West High School.

Melissa Huckaby, 28, a Sunday school teacher who lived in the same mobile home park as Sandra's family, has been charged with murder, kidnapping, the performance of a lewd and lascivious act on a child under 14, and rape by instrument.

If convicted, she would face the death penalty or life in prison without parole, San Joaquin County District Attorney James Willett said this week.

A private memorial service for Sandra was held Wednesday. Her casket, signed by classmates, was taken to a nearby burial site by a horse-drawn carriage.

All About Sandra Cantu • Murder and Homicide • Missing Children