SAN DIEGO, California (CNN) -- Drug traffickers are throwing everything they've got at getting drugs into the United States any way they can. 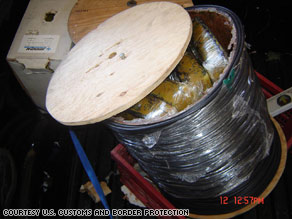 At the San Ysidro crossing near the Mexican border, officials have found drugs smuggled in things such as tables, toys, furniture, holiday candles, even tennis shoes.

"Their bottom line is to make money, and they are going to do whatever they can to ensure that that happens," said Mike Unzueta, the special agent in charge for Immigration and Customs Enforcement in San Diego. "They've become very, very creative."

Drugs also are brought in underground through tunnels; some 100 have been discovered since 1990 along the 1,950-mile U.S.-Mexico border. The most sophisticated tunnels have lights, air systems and hydraulics. While drugs flow north into the United States, weapons and cash flow south into Mexico.

The smuggling organizations are well-established and sophisticated. They have a recognized hierarchy and employ the latest technology, said Rafael Reyes, chief of global enforcement operations for the U.S. Drug Enforcement Administration.

Border agents have found radios, cells phones and global positioning system tracking devices, leading officials to believe drug cartels positioned on or close to the border are in constant contact with drug runners.

"These guys are very ingenious," Reyes said. "They will exploit any vulnerability that they can."

Reyes said that means factoring in the possibility a certain percentage of drugs will be seized by federal agents: "They'll line up 10 loads, and if you pick off two or three, well, that's the cost of doing business, 'I got seven across.' So it's that shotgun mentality."

The same thinking applies to drugs smuggled in the waters of the eastern Pacific off the coasts of Central and South America.

U.S. Coast Guard Capt. Vincent DeLaurentis and his crew on the cutter Hamilton came back from three months of searching for drugs inbound to Mexico. They covered an area of ocean about the size of the Southeastern United States. They captured six hard-to-detect boats that travel at night and seized 30,000 pounds of pure cocaine.

DeLaurentis said drug traffickers have become much more aggressive in their smuggling tactics. Among the new trends, he said, "They're using vessels that are less and less detectable, whether it's these go-fast boats that travel at night or the new self-propelled semi-submersible vessels."

Click here for photos of the ways in which drugs are moved into the U.S. »

Known as SPSS, self-propelled semi-submersibles are something like submarines, but they cannot fully submerge. Anywhere from several inches to a couple of feet remain above the water line; they are painted a blue or gray for camouflage, and they are flat on top with valves and air holes.

They are difficult to detect and have become increasingly sophisticated. Some can travel up to 5,000 miles and use fuel tanks for ballast. They can carry some seven to 10 tons of drugs, and because of their low profiles and low radar signatures, the vessels are popular, DeLaurentis said.

The submersibles are built in the rebel-controlled jungles of Colombia, and the U.S. Coast Guard said cartels pay for construction. The craft rendezvous with fishing vessels or "go-fasts" -- boats that are typically 40 feet long, go 40 knots and can carry several tons of heroin or cocaine. The drugs then go to Mexico, where the cargo is offloaded and transported across the border into the U.S.

"The fact they're developing semi-subs that can carry huge amounts of drugs and running those vessels for thousands of miles tells me that it's a very sophisticated operation," said Capt. Tom Farris, commander of Coast Guard Sector San Diego.

The Coast Guard tries to engage and board these vessels before they get to Mexico. But evidence of drug smuggling needed for prosecution is hard to come by --- because traffickers on these crafts easily can escape by opening a hatch, tossing out a life raft and then scuttling the vessel to the bottom of the ocean along with its cargo.

A U.S. law signed in January makes it illegal to operate a stateless SPSS and will allow the Coast Guard to arrest people it used to have to release because drug evidence was on the bottom of the ocean.

Mexico produces three out of the four major abused drugs in the United States -- marijuana, heroin and methamphetamines, according to the DEA. Cocaine, however, comes from South America, but it and the other three drugs are all shipped through Mexico into the United States.

According to the DEA, 90 percent of all cocaine destined for the U.S. comes through the Mexican-Central American corridor, with 47 percent not stopping in Central America but going to Mexico.

The primary transit routes from Mexico into the U.S. are: Tijuana to San Diego, Sonora to Phoenix, Arizona; Chihuahua to El Paso, Texas; and the states of Nuevo Leon and Tamaulipas, which will cover the remaining south of the border, to the Texas cities of Laredo and Brownsville.

"Those are the principal lucrative corridors," Reyes said. They are "controlled by separate organizations because of the market they have in the United States, and it is a profit-minded approach they take in securing these corridors for themselves."

The San Ysidro port of entry is the busiest border crossing with Mexico and the United States. More than 110,000 people pass through every day, making it fertile ground for drug cartels looking for new ways to ship drugs.

Port Director Oscar Preciado oversees the San Ysidro crossing. On any given day, he said agents seize five to 10 loads -- about 50 to 500 pounds of marijuana, cocaine, heroin or methamphetamines. Recent seizures include marijuana in tires and heroin in phony fuel tanks, some with secret levers.

"They'll put it anywhere they can, and they're very creative in creating their own compartments and concealing them," Preciado said.

With border security tighter than ever, Preciado said drug traffickers are paying kids as young as 14 to smuggle dope -- mostly marijuana.

Drug traffickers who frequently bribe Mexican police are now trying to bribe U.S. agents. While rare, officials said, it is serious. "Corruption is one of our major concerns. We do everything we can to stop corruption," Preciado said.

With billions of dollars at stake, cartels will try anything, officials said. "If we can't catch the drugs, what we want to do is make them spend more resources in order to get the drugs across the border," said the Coast Guard's Farris.

All About Illegal Drugs • Border Control and Customs • Mexico