(CNN) -- Police are searching for any other alleged victims of a Sunday school teacher accused of raping and killing an 8-year-old girl from Tracy, California. 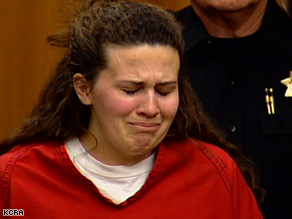 "We are asking the public if they have any indication that any of their children may have had inappropriate contact with [the suspect] to contact us," Tracy Police Sgt. Tony Sheneman said Tuesday evening. "There has been no indication that this has happened. But she is a Sunday school teacher and did have contact with children, so that is why we are asking."

Melissa Huckaby, 28, was arrested and charged with killing and raping 8-year-old Sandra Cantu, a friend of her 5-year-old daughter.

Huckaby, wearing red jail scrubs over a white T-shirt, was in court Tuesday for an arraignment. She was charged with murder, kidnapping, the performance of a lewd and lascivious act on a child under 14 and rape by instrument.

If convicted, Huckaby would face the death penalty or life in prison without parole, San Joaquin County District Attorney James Willett told reporters after the hearing. A decision on whether to seek the death penalty will be made later, he said.

Huckaby did not enter a plea or speak during the court hearing, although she flinched when Sandra Cantu's name was spoken, and she cried at times.

Huckaby is the granddaughter of Clifford Lane Lawless, pastor of Clover Road Baptist Church near the mobile home park, and she taught Sunday school at the church, police have said. The church was searched as part of the investigation into Sandra's disappearance and death.

A memorial ceremony is scheduled for Sandra at 1 p.m. Thursday at a high school in Tracy, police said.