(CNN) -- Nazi war crimes suspect John Demjanjuk was granted an emergency stay late Tuesday to block what appeared to be his imminent deportation to Germany. 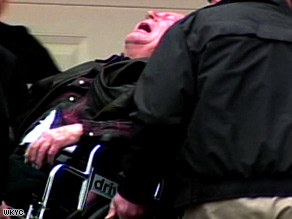 The ruling, handed down by the 6th U.S. Circuit Court of Appeals, came less than two hours after federal immigration officials took Demjanjuk into custody at his home near Cleveland, Ohio.

The Justice Department would not immediately comment on the stay, saying officials needed to review the order.

The last-minute legal maneuvering leading to the order was the latest chapter in one of the longest-running pursuits of an alleged Holocaust perpetrator in history.

The deportation of Demjanjuk, who had been transported to an Ohio detention facility when the stay was issued, would set the stage for what would likely prove to be an extraordinary German war crimes trial.

"Upon due consideration of the motion for a stay and the opposition by the attorney general, we conclude that a stay of removal is warranted," the circuit court wrote.

Representatives of Attorney General Eric Holder argued in response to an emergency motion filed by Demjanjuk's attorney that the circuit court does not have jurisdiction over the case.

But the court acted anyway.

"Because it is our understanding that the government may remove the petitioner later today, we are compelled to rule on the motion for a stay prior to addressing the jurisdictional concerns raised by the government," the court said.

On Friday, a federal immigration board rejected an emergency appeal for a stay of Demjanjuk's deportation. His attorney, John Broadley, had argued that deporting him would constitute torture because of his health problems.

Broadley has said Demjanjuk suffers from pre-leukemia, kidney problems, spinal problems and "a couple of types of gout."

When Broadley filed another appeal with the 6th Circuit Court, Justice Department officials said they believe that his chances of getting the board's ruling overturned are slim.

"Looking at what's going on in Cleveland ... is truly appalling," Broadley said shortly after Demjanjuk was taken into custody.

"You have an 89-year-old man with various physical ailments, and you have eight guys from [Immigration and Customs Enforcement] trying to stuff him into a wheelchair to send him to Germany. This looks like something taking place in Germany and not in the United States."

He called Demjanjuk's comparison of his planned deportation to torture "preposterous coming from a person that served the [Nazi organization] S.S. in a death camp. It is a preposterous argument and insulting to the survivors of the Holocaust."

Hier said that 250,000 Jews were killed at the camp and that none of the guards who worked there was blameless.

"You were there for one job: kill the Jews," he said. "And that's what they did full-time."

German authorities issued an arrest warrant for Demjanjuk on March 10, accusing him of being an accessory to 29,000 counts of murder as a guard at Sobibor from March to September 1943.

The warrant was issued after the authorities concluded that an identification card provided by the U.S. Office of Special Investigations was genuine.

Demjanjuk, a retired auto worker, has been fighting charges of Nazi war crimes for more than two decades.

He was previously extradited from the United States to Israel, where he was convicted in 1986 of being "Ivan the Terrible," a guard at the notorious Treblinka extermination camp. The conviction was overturned by Israeli courts on appeal, and he returned to the United States.

The United States filed new charges against him in 1999, again alleging that he had been a concentration camp guard. He was stripped of U.S. citizenship and has been awaiting deportation since 2005, after fighting his case all the way to the Supreme Court.

Demjanjuk, a Ukrainian, says he saw action in the Soviet army and later was a prisoner of war held by the Germans.