LOS ANGELES, California (CNN) -- After about 30 hours of deliberation, a jury on Monday convicted music producer Phil Spector of second-degree murder in the death of actress Lana Clarkson more than six years ago. 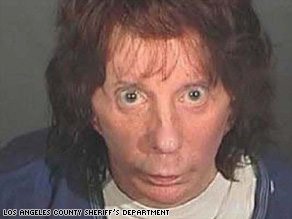 Phil Spector will not remain free on bail pending his May 29 sentencing.

Wearing a black suit with a red tie and pocket square, Spector showed no reaction as the verdict was announced. Now 69, he faces a sentence of 18 years to life in prison when he is sentenced May 29.

Asked if he agreed to the sentencing date, Spector quietly answered, "Yes."

Prosecutor Alan Jackson said he believed the jury reached the correct verdict, and he acknowledged the strength and backing of Clarkson's family. But defense attorney Doron Weinberg said Spector's defense team disagreed and planned to appeal.

Watch the lawyers give their views of the verdict »

"This was not an isolated incident," Fidler said, noting Spector's two previous firearm-related convictions from the 1970s. "The taking of an innocent human life, it doesn't get any more serious than that."

Spector's wife, Rachelle, was in the courtroom to hear the verdict Monday, as was Clarkson's mother, Donna.

Clarkson, 40, was found dead, slumped in a chair in the foyer of Spector's Alhambra, California, mansion with a gunshot wound through the roof of her mouth in February 2003.

A mistrial was declared in Spector's first trial in September 2007. After deliberating 15 days, jurors told Fidler that they were unable to reach a verdict. Spector was also charged with second-degree murder in that trial. Jurors deadlocked 10-2 in favor of conviction.

Do pointed out, however, to jurors that Clarkson bought new shoes on the day of her death -- something a suicidal woman would not have done, the prosecutor said.

Clarkson starred in the 1985 B-movie "Barbarian Queen" and appeared in many other films, including "DeathStalker," "Blind Date," "Scarface," "Fast Times at Ridgemont High" and the spoof "Amazon Women on the Moon." She was working as a VIP hostess at Hollywood's House of Blues at the time of her death.

But prosecution witnesses painted Spector as a gun-toting menace. Five women took the stand and claimed he had threatened them with firearms. His driver testified that he heard a loud noise and saw the producer leave the home, pistol in hand, saying, "I think I killed somebody."

Spector's retrial began in October. Fidler ruled that jurors could consider the lesser charge of involuntary manslaughter against Spector.

Spector's professional trademark was the "Wall of Sound," the layering of instrumental tracks and percussion that underpinned a string of hits on his Philles label -- named for Spector and his business partner, Lester Sill -- in the early 1960s. iReport.com: What do you think of this verdict?