(CNN) -- Nothing about Melissa Huckaby, a Sunday school teacher at her grandfather's California church, would indicate she's capable of killing her daughter's 8-year-old friend as police allege, relatives say. 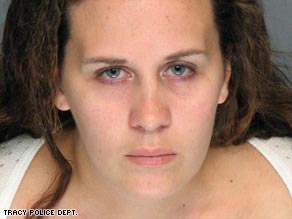 Melissa Huckaby faces charges of kidnapping and murder in the death of 8-year-old Sandra Cantu.

Huckaby, expected to be arraigned Tuesday in the death of Sandra Cantu, is a wonderful mother who is at ease with other children, relatives say. Cantu's body was found last week in a suitcase submerged in a pond.

But they acknowledge her life was less than tranquil before moving into her grandparents' Tracy, California, home last year. They say she's had difficulties dealing with a divorce, and she's had legal problems, including bankruptcy and a theft conviction.

"She is a good, church-going girl, but she has had her challenges," California resident Cynthia Browning, Huckaby's great-aunt, told the San Francisco Chronicle.

Huckaby, 28, was arrested on charges of murder and kidnapping late Friday, four days after the suitcase with Cantu's body was found at a dairy farm's pond in Tracy, not far from the church run by Huckaby's grandfather.

Cantu was last seen alive March 27 in the Tracy mobile home park where she lived. It's the same park where Huckaby lives with her 5-year-old daughter and grandparents. The two children were close friends and played frequently, Tracy police said.

Investigators believe the suitcase is Huckaby's and that she lied about it being missing, police said. Police Sgt. Tony Sheneman told reporters over the weekend that he didn't know the motive in the slaying, and he declined to say whether Huckaby confessed but said "she revealed enough information that we had probable cause to arrest her."

On Sunday, Huckaby's relatives told reporters in Tracy they were shocked by the allegations against her.

"The information we've been given regarding the charges against [her] are completely out of character for her," said one man, who identified himself only as a relative. Another relative, also declining to give her name, said Huckaby "is a fantastic mother, very loving."

Huckaby, who grew up in Orange County, California, moved in with her grandparents about eight months ago, according to the Contra Costa Times. She did so in part so that she'd have more time "to take better care of her daughter, who ... gets sick a lot," Browning told the Chronicle.

Huckaby divorced a few years ago and has had a hard time coping, her father, Brian Lawless of Orange County, told the Chronicle. She has fought depression, her relatives said, according to the newspaper.

She also has faced legal difficulties. Citing court records, the Tracy Press reported she pleaded no contest January 9 to a felony charge of second-degree commercial burglary and a misdemeanor charge of property theft.

A criminal complaint says she was jailed in Los Angeles County on a property theft conviction in 2006 and that she tried to steal from a store in November 2008. According to the complaint, she was on probation in San Joaquin County and was due back in court Friday.

And she filed for bankruptcy in 2003, reporting credit card and medical debt, according to CNN affiliate KCRA-TV.

Relatives said her only current job was the Sunday school teaching, according to the Chronicle.

The allegations stunned a friend of Huckaby's from high school, Emily Glyer Fontes, according to the Orange County Register. Fontes said she recalled that Huckaby "was almost like a mother" to a baby girl that Huckaby's parents adopted while she was in high school.

"That's why this is so overwhelming to me," Fontes, who said she and Huckaby were on the school's dance team, told the Register. "She was so wonderful with kids -- absolutely amazing. I feel so completely confused and so devastated about this. Everything I knew has been turned upside down."

Police have not said how Cantu died. The day she was last seen, she came home from school, kissed her mother and left to play with a friend who lives nearby, a family spokeswoman has said.

Huckaby also told the Tracy Press that she owned the suitcase in which the child's body was found, but said she reported it missing the day before the body's discovery. She said it disappeared about the same time the child did.

Sheneman told reporters after Huckaby's arrest that "inconsistencies" between that interview and statements Huckaby had made to police were one reason police re-interviewed her Friday night.

All About Police • Murder and Homicide • California