(CNN) -- Kristina Heeger was wounded in her French class nearly two years ago when a gunman killed 30 of her classmates and instructors at Virginia Tech's Norris Hall. 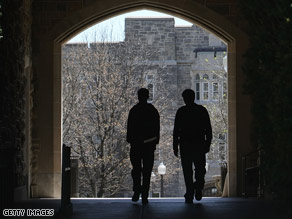 Students walk through a passageway connecting Norris Hall to another building at Virginia Tech.

Still coping with memories of the massacre, she returned to the historic stone building Friday as the university reopened the wing of the academic building where the deadliest mass shooting in recent U.S. history occurred.

"It's still something I deal with every day," Heeger told reporters during a tour of the newly refurbished west wing of Norris Hall's second floor, where visitors took in the gleaming, contemporary space.

The renovation after the April 16, 2007, shooting created six rooms and laboratories for the Department of Engineering Science and Mechanics, university officials said.

The 4,300-square-foot area will also house the Center for Peace Studies and Violence Prevention, which relocated to the building.

The center hopes to "develop transdisciplinary programs that target prevention of violence through research, education and engagement," said Jerzy Nowak, founding director of the center.

"Relocation to Norris Hall has a symbolic character to the families and friends of the victims, to the survivors, Virginia Tech, the Blacksburg community, and the world," he said.

Nowak's wife, French instructor Jocelyne Couture-Nowak, was among the 30 students and faculty members Seung-Hui Chokilled at Norris Hall before taking his own life there. Earlier in the day, the student gunman killed two students at a dorm.

Ishwar Puri, head of the engineering department, was at Norris Hall Friday, stressing the importance of the campus moving past the tragedy.

"I was defeated on April 16, 2007, by the suicide-assassin," Puri told CNN affiliate WDBJ. "But I pledged to myself he would not defeat me ever again."