BINGHAMTON, New York (CNN) -- Authorities defended the timeliness of police response to Friday's massacre at an upstate New York immigration services center as funerals were set to begin Sunday for two of the 13 slain. 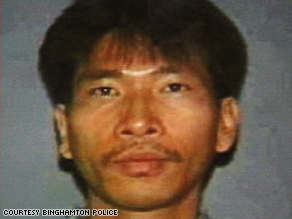 Jiverly Wong, 41, has been identified by police as the gunman in the Binghamton, New York, rampage.

"No decisions by the police had any bearing on who died," Broome County District Attorney Jerry Mollen told reporters Sunday.

The first officers arrived at the American Civic Association about three minutes after the first emergency calls were made Friday, according to a timeline by the Binghamton Police Department.

Officers did not enter the building for about 40 minutes, police said.

"No one was shot after police arrival, and none of the people who had been shot could have been saved, even if the police had walked in the door within [the] first minute," Mollen said. "The injuries were that severe."

Police said Jiverly Wong, a 41-year-old Vietnamese immigrant from an ethnic Chinese family, fatally shot his victims and then turned his gun on himself. City officials on Sunday released a list of all the victims.

A receptionist at the American Civic Association called 911 at 10:31 a.m. Friday while she hid under her desk, said Binghamton Police Chief Joseph Zikuski.

She was shot in the stomach and pretended to be dead before crawling under the desk, he said.

Four people, including the receptionist, remained in serious condition in local hospitals but were expected to survive, the chief said.

Wong had been taking English classes at the association and was upset about recently losing a job, police said. But officials on Sunday were still trying to determine a motive.

Zikuski said the first 911 calls were in "broken English," and dispatchers "could not determine what was the problem." But two minutes after the first calls, officers were being dispatched to the civic association, and the first units arrived one minute later, the chief said.

He said in these types of situations officers have orders to enter a building if shooting is still happening inside, but in this case the shooting had stopped. At 10:38 a.m., one of the wounded called with a description of the gunman. The department's tactical squad did not move in until 11:13 a.m., Zikuski said.

Mollen said the issue of the police response was "an obvious question" that will be investigated, but "now's not the time."

"We need a lot more information before any reasoned, intelligent response can be given to you," he said.

Those who knew Wong said they were not surprised by his actions, Zikuski said Saturday.

"Some of this behavior on his [Wong's] part wasn't a total shock," the chief said.

Wong came to the United States in the late 1980s and lived in Binghamton before moving to California in the early 1990s, police said. He returned to Binghamton in July 2007, Zikuski said.

Wong became a U.S. citizen in 1995 and married and divorced while living in California, where he had been convicted on a misdemeanor charge of writing bad checks, according to Zikuski.

Police found at the center two semi-automatic handguns, a .45-caliber and a 9 mm, licensed to Wong. The guns were purchased locally, and Wong made trips to a firing range "at least once a week, sometimes more than that," Zikuski said.

Wong had attempted to purchase "a number of firearms," the chief said. Purchasing a gun in New York takes about two weeks, Zikuski said, and Wong would return to a store during that period, "cancel that order and purchase another one."

Wong was wearing body armor during the shooting. Investigators are "looking into that" because New York limits body armor purchases to law enforcement, Zikuski said.

Funerals for two victims were held Sunday afternoon at a local mosque.

An interfaith memorial service for all the victims was held Sunday evening, and hundreds of people took part in a candlelight vigil afterward.

Watch relatives remember one of the victims, Roberta "Bobby" King »

"In a strange way, this tragedy has brought everyone together," Binghamton Mayor Matthew Ryan said.

"We are a good community, a nonviolent community," Ryan said earlier of the city of about 50,000 people about 140 miles northwest of New York City. "And we are going to spread the word that this is a community that will come together and heal."

More details emerged over the weekend about the shooting.

Wong used his car to barricade the center's back door and entered through the front of the building, authorities said.

Wong lived with his parents in Johnson City, near Binghamton, the site of a law enforcement search Friday.

"They took a computer hard drive -- they took an empty long gun case and some other bags," the mayor said.

Angela Leach, a representative of the American Civic Association, read a statement through tears at a news conference Saturday.

"Whatever drove this individual to do what he did I cannot possibly fathom," Leach said. "But we will come out of our grief and sadness more resolute in our mission and more dedicated than ever to help people realize the dream of American citizenship."

One of the victims was Omri Yigal's wife, Dolores, Yigal told CNN. A native of the Philippines, she was taking English classes at the center to better herself. Yigal said he had no anger for the shooter.

He crossed his arms and his eyes to the ground.