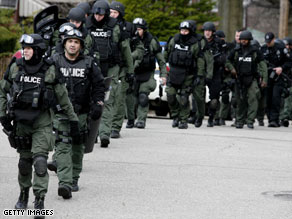 "We have never had to lose three officers in the line of duty at one time at one call," Harper said.

Suspect Richard Poplawski surrendered around 11 a.m. outside the Stanton Heights home he shares with his mother after a standoff that lasted nearly four hours and left two more officers injured.

Wearing a bulletproof vest and armed with an AK-47, a long rifle and a pistol, Poplawski fired about 100 rounds during the standoff, Harper said.

Poplawski was taken into custody after surrendering to law enforcement. He is expected to face charges of homicide, aggravated assault and other related offenses, Harper said.

Officer Paul Sciullo III was the first to approach the home after responding to the scene around 7:05 a.m. He was shot in the head as he entered the doorway.

When Officer Stephen Mayhle tried to help his fellow officer, he too was shot in the head, Harper said.

Officer Eric Kelly, who rushed to the scene on his way home after finishing his shift, was fatally shot as he attempted to assist his fallen colleagues, Harper said.

The shootings triggered a standoff between Poplawski, who was shooting from his bedroom window, and law enforcement agencies from several jurisdictions, Harper said.

Poplawski opened fire at an Army SWAT vehicle that arrived around 8:30 a.m., preventing them and medics from reaching the wounded policemen.

Officer Timothy McManaway also was shot in the hand, the chief said. Another officer, Brian Jones, broke his leg while trying to get over a fence while securing the rear of the house, he said.

Some neighbors were evacuated during the standoff. Neighbors reported that the family had caused trouble before and Harper said police had responded to calls from the home two or three times.