(CNN) -- A surveillance video of 8-year-old Sandra Cantu, missing since March 27, shows the child in the mobile home park where she lives, skipping and happily swinging her arms on the day she disappeared in Tracy, California. 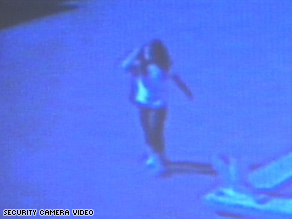 A surveillance video shows Sandra Cantu skipping in the mobile home park where she lives.

The grainy scene appears for about eight seconds before she disappears from view. Police Lt. Jeremy Watney showed the clip Saturday at a news conference, but offered no details.

"I can't get into specifics of where it came from. That's all part of the investigation," he said. "The CD will show you exactly how she looked on that particular day when she went missing."

In the video, the girl emerges from a pathway at the Orchard Estates Mobile Home Park into what appears to be an alley. To her right is the corner of what looks like a wooden deck; there seem to be deep shadows on the left.

Watney said authorities initially thought Sandra was carrying a purse or backpack, but the images turned out to be shadows. He said authorities have "hundreds of hours of videotapes" in the case.

The day the child disappeared, she came home from school, kissed her mother and left to play with a friend who lives a couple of homes away. A short time later, she left that home to go to another friend's home, according to a spokeswoman for her family. She was reported missing about 8 p.m.

Watney said the reward for information leading to her whereabouts has increased to $26,000, and authorities are following more than 800 leads. More than 300 trained searchers from 17 agencies were out on Saturday.

A door-to-door canvass moved outside of the park Saturday afternoon as police continued to collect details from residents in the area.

Watney said police executed search warrants on a home, a vehicle and a person Friday, but nobody has been detained in the case. "It's just looking for clues and evidence" he said of the warrants.

Watney said the reward for information leading to her whereabouts has increased to $26,000, and authorities are following more than 900 leads. Over 300 trained searchers from 17 agencies were out on Saturday.

On Monday night, Tracy police and FBI agents searched six locations, some in the Orchard Estates Mobile Home Park and some in Tracy. All of the places were connected to two men who live in the mobile home park, officials said.

Police in Tracy, California, are asking anyone with information about Sandra Cantu to call the Tracy Police Department at 209-831-4550 or the National Center for Missing and Exploited Children at 1-800-843-5678.

Authorities have not called the men suspects and have not named them publicly. They did not say how or if they might be related to the case.

Police have said they do not believe Sandra ran away.

The girl's aunt, Angie Chavez, told CNN Headline News' Nancy Grace that Sandra's father lives in Mexico and was not around the day she disappeared.

Tracy is about 60 miles east of San Francisco.